How do other countries compare to Ireland on asylum applications?

November 16th, 2019: Tumi Gaonwe fled South Africa with her sons after a change in politics suddenly left her life in danger. The family has lived in emergency accommodation in Bray and Courtown and now lives in direct provision in Carrick On Suir. Video: Bryan O'Brien 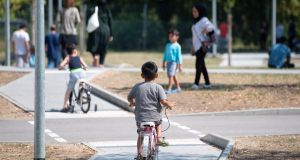 Asylum seekers at a reception and deportation centre in Regensburg, Bavaria, Germany. The average wait time for a final decision on asylum applications in Germany is 16.8 months, an increase from 12.6 months in 2017 due to a backlog. Photograph: EPA

The Irish asylum system has been widely criticised over the past two decades, with complaints about the length of time people spend waiting for an answer and the lack of own-door accommodation.

The Department of Justice said asylum applicants can expect to wait 15 months for an initial decision, while those on a priority list – certain countries and vulnerable people, including unaccompanied minors – wait about nine months.

Last year the Government announced new measures to allow eligible asylum seekers to work while their applications for refugee status were being considered.

Figures last May showed about 15 per cent of the adult population in direct provision were employed. Depending on their earnings this would mean a reduction in their direct provision allowance.

How does this compare to the way other countries process asylum applications?

People who claim asylum in the UK must do an initial screening interview with the UK border agency. Asylum seekers are assigned a case worker and then face a substantial interview. A decision is usually made within six months.

Asylum in the UK is granted for five years, but is subject to review by the government. At the end of five years the person may be eligible for full residency.

Asylum seekers are initially housed in reception centres with full board but no cash provided. B&Bs and hotels have also been used as emergency accommodation. Asylum seekers should not spend longer than 19 days in this initial reception accommodation, although backlogs have led to people spending three weeks in the system.

Once an asylum seeker qualifies for section 95 support (housing and £36.95 per person per week for basic living expenses) they are moved into a flat or shared house, usually in the same region. They cannot choose where they want to live.

In Britain this accommodation is in the north, midlands and southwest of England and in Wales and Scotland but not in the south of the country or London. All accommodation is managed by three large private companies contracted by the Home Office. Much of this is sub-contracted to smaller companies.

Migrant Help UK, which oversees process claims in Britain, subcontracts its work in Northern Ireland to the Bryson Intercultural charity which becomes the first point of call for newly arrived asylum seekers in the North.

The Mears housing groups oversees the accommodation of asylum seekers in rental houses and apartments in Northern Ireland. Single people are placed in shared accommodation with four to five people to a house, while families are allocated a home.

Asylum-seekers in the UK are generally not allowed to do paid word. If a person has spent more than a year waiting for an answer on their claim they can apply to the Home Office for permission to enter employment. If permission is granted the person can only apply for vacancies from listed shortage occupations. This list is highly restrictive, making it difficult to access work. Self-employment is prohibited.

The 2018 “lift the ban” campaign called on the UK government to reduce the waiting time for permission to work to six months and to allow access to all job vacancies.

Asylum applicants must do an initial interview with the Spanish office of asylum and refuge upon registration. This is followed by a second more substantial interview.

Applicants should receive an answer on their asylum claim within six months, but many applications take longer than this. The duration of the process varies between three months and three years. In 2018, the average duration was 288 days for Syrians, 505 days for Afghans and 633 days for Iraqis. The overall average processing time in 2018 was around 16 months.

Some 16 NGOs are involved in securing accommodation for asylum seekers in reception centres and private apartments.

Since 2015 hotels and hostels have been used for a maximum of 30 days for new arrivals. In 2018 this was extended to four months because of a rise in applications.

Asylum seekers are legally entitled to start working six months after their application for asylum has been submitted. The work permit is valid for any labour sector. Labour integration support schemes to asylum seekers include pre-employment training, occupation training and job-seeking support.

An initial time limit of six months is set for claims decisions. If this is not met the office applies for an additional nine months, and this can be extended for a further three months.

In 2017 the French presidency set a target of processing first-instance claims of two months. In 2018 the average waiting time was 112 days, down from 142 the previous year. Only 3 per cent of applications were pending longer than a year in 2018.

In 2018 only 44 per cent of the 128,890 first-time applicants were placed in accommodation, reflecting the severe housing shortage for asylum seekers. Most centres are set up to receive families or couples, leaving many single men and women without a place to stay.

Thousands of migrants continue to live in makeshift camps in Paris and Calais, as well as Nantes, Grande Synthe and Metz.

Since March 2019, asylum seekers are allowed to work only if the government has not made a decision on their asylum application within six months. In order to work asylum seekers must provide proof of a job offer or employment contract to secure a work permit.

Germany’s federal office for migration and refugees oversees the decision- making process for asylum claims. If no decision is made within six months the office must notify asylum seekers with an estimate for when the decision will be made. The average wait time for a final decision on asylum applications is 16.8 months, an increase from 12.6 months in 2017, due to a backlog on appeals.

Arrival centres were introduced in December 2015 to fast-track procedures. There people undergo medical examinations, identification checks and register for asylum applications and interviews.

Asylum seekers are housed in reception centres for up to six months yet in rare cases people can remain there up to 24 months. After six months most are moved into collective accommodation centres, usually located in the same federal state as the initial reception centre. However, refugee housing policies vary between federal states, and in certain areas most asylum seekers live in apartments. Most emergency shelters used in 2015 and 2016 have now closed down.

Asylum seekers can enter the labour market after three months. However, those still living in the initial reception centres cannot take up work until they leave the centre. In order to secure an employment permit an asylum seeker must show proof of a job offer. Asylum seekers cannot be self-employed.