Donnelly unable to attend at ‘short notice’ but happy to attend next week, spokeswoman says 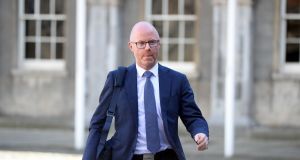 A stand-off has developed between the Minister for Health and the Oireachtas Committee on Covid-19 over a request that he appear before the committee this week.

A spokeswoman for Stephen Donnelly said he and acting chief medical officer Dr Ronan Glynn would be unavailable to attend the committee’s session on Thursday. The committee is holding a session on the recent spike in Covid infections in meat plants, as well as the Government’s changing response to the crisis in light of new developments this week.

It is understood an initial request for departmental representatives to attend the session, alongside Dr Glynn, was made on Monday this week, but the department told the committee that nobody from the department was available.

Following this, committee members agreed that a second letter be sent, this time to Mr Donnelly, noting it had “expressed the view that communication and democratic accountability are paramount at this time”.

The letter said the committee’s preference was that Mr Donnelly and Dr Glynn attend together if possible, “or with a designated official on your behalf”.

In addition to recent outbreaks and strategic developments, the committee is set to discuss the implications of a Zero-Covid island policy, which has been supported by a group of scientists and academics who wrote to the committee last week. The group includes prominent public health, infectious disease and biochemistry experts.

The Health and Safety Authority, workers representatives and Meat Industry Ireland have been asked to appear at the first session of the committee on Thursday. Senior officials from the Department of Agriculture will also appear.