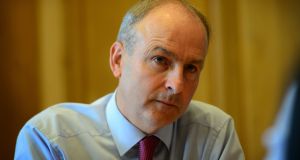 The Government intends to conduct Covid-19 testing on more than 60,000 people each week after deciding to extend widespread testing to meat processing facilities and direct provision centres.

Within weeks, weekly testing will be carried out on the 15,000 workers employed in meat plants in the State, as well as the estimated 6,500 asylum seekers residing in direct provision centres.

With regular tests being carried out for the past two months on the 40,000 residents of private and public nursing homes, it will bring the overall figure to more than 60,000.

Mr Martin said the testing would start in the three counties affected by the current lockdown – Kildare, Offaly and Laois – and would then be extended nationwide. He said it would be done on a weekly basis initially but signalled it would probably then be carried out fortnightly once the incidence rate began to fall.

“We are doing this with a view to making sure we can keep the pressure on this virus, identify it, isolate it and deal with it,” he said after the meeting.

More than 300 cases of Covid-19 were recorded in Co Kildare in the past fortnight, almost twice as many as any other county.

The other two counties on which regional restrictions were imposed last Friday – Offaly and Laois – have 14-day incidences of 109 and 83.8 respectively.

The logistics and funding of the tests has yet to be worked out but there has been engagement this week between the Health Service Executive and employers and unions in the meat industry to discuss the detail.

The Cabinet committee also decided to approve a Government package of economic supports for the regions in lockdown.

Tánaiste Leo Varadkar, Minister for Public Expenditure Michael McGrath and Minister for Finance Paschal Donohoe will begin to examine what type of supports can be made available to affected business in the three counties. The Ministers are expected to engage with business groups as well as local politicians during this process.

It is understood the supports would be designed in a way that allowed it to be applied to other parts of the country that go into lockdown in the future, senior sources said.

With further localised outbreaks of the disease likely, the aim is to draw up something which can be repeated again.

And with backbench Government TDs calling for further grants or extensions of local authority rates waivers, new policy interventions will be considered this week, though Government sources said any support package would largely be based on existing instruments used to deliver the €7 billion July stimulus programme.

Speaking after a Cabinet committee meeting, Mr Martin said: “We had an economic assessment from the Minister for Public Expenditure and from the Tánaiste in relation to the business side and again we looked at measures that could be taken to help businesses in the three counties that are subject to the restrictions announced last Friday, and relevant Ministers will be meeting this week with a view to actioning some response in relation to that by the end of the week.”

The meeting, which lasted two hours, was attended by the Taoiseach, the Tánaiste, and Mr McGrath as well as by Dr Glynn. A number of other Ministers joined via video link including Stephen Donnelly, Dara Calleary, Simon Coveney, Eamon Ryan and Mr Donohoe.