Department has no plan to award bravery medals to Jadotville survivors

Irish soldiers who survived the Siege of Jadotville during a UN peacekeeping mission in the Congo in 1961 were presented with specially commissioned medals in Custume Barracks in Athlone on December 2nd, 2017. Video footage: Andrew Clarke / Reuters 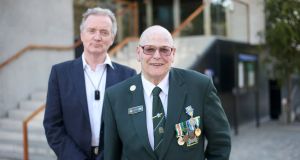 The surviving soldiers from the Siege of Jadotville will not be awarded the bravery medals recommended by their commanding officer Pat Quinlan almost 60 years ago.

Although the men of A Company have been recognised with several honours in recent years as a result of a campaign by the late Col Quinlan’s son, Leo and others, they have never been awarded the individual medals for bravery they were recommended for following the siege in the Congo in 1961.

During the siege, which was recently dramatised in a Netflix movie starring Jamie Dornan, some 150 Irish peacekeepers, with no battle experience, held out for five days against about 3,000 mercenaries and local militias without suffering a single fatality.

The tactics employed by the Irish soldiers at Jadotville have since been studied at war colleges around the world. However, for years after the battle Col Quinlan and his men were derided in Ireland because they had eventually surrendered. Several died by suicide.

After achieving recognition for the achievements of his father and his men in recent years, Leo Quinlan has continued to campaign for them to be awarded Distinguished Service Medals (DSM) or Military Medals for Gallantry (MMG) – the two highest Defence Forces honours.

He has found the original list of recommendations made by his father after the battle which put forward 33 men for DSMs and MMGs. Eight of these men are still alive.

Two of the fellas were 15 years old. Their mothers collected their children’s allowance while they were fighting in Jadotville

“One of those recommended for a MMG and a DSM was a 17-year-old boy from Mayo. He died not even knowing he was recommended,” said Mr Quinlan, who also served as an army officer.

“Another man, Tighe Quinn, who is still alive, was recommended for both medals. He was 18 years of age and in charge of a mortar crew.”

“Two of the fellas were 15 years old. Their mothers collected their children’s allowance while they were fighting in Jadotville.”

In response to queries, the Department of Defence said the matter of bravery medals for the men was considered by “a properly constituted medals board” in 1965 and no awards were made for Jadotville. This decision was approved by the then chief of staff. A later chief of staff ordered a review of the decision and it was upheld, it said.

The department said both medals are time-bound – two years in the case of the MMG and four years for the DSM.

“The issue of the award of medals to the men of A Company, 35th Infantry Battalion was comprehensively addressed in 1965,” a spokeswoman said.

The department also said the men had been honoured in several other ways, including a unit citation presented in 2016 and specially commissioned Jadotville medal awarded in 2017.

“On the basis of actions to date and available records it is not proposed to award Distinguished Service Medals or Military Medals for Gallantry to specific individuals,” the department said.

It added Minister for Defence Simon Coveney will consider any information to support a reconsideration of this request.

Mr Quinlan said there was a big difference between the unit citation and the Jadotville medals which were awarded to the unit as a whole, and the individual medals for bravery recommended by his father.

He also said there was precedent for a Minister of Defence to order that the rules on time limits be waived in certain circumstances.

Sipo legislation to be reviewed following Michael D’Arcy case, Taoiseach tells Dáil 14:08
Demolition of historic home of The O’Rahilly in Dublin begins 14:00
Irish Water criticised by advisory body for lack of progress on discharges and leakage 13:47
Health staff told to wear masks when passing through busy hospital areas 13:27
Man’s death in prison after restraint by officers is investigated 13:24