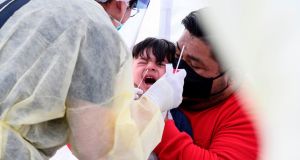 Alternative, less traumatic Covid-19 testing for small children and the possibility of treating fevers differently to cases in adults are both being examined by medical experts who hope to reach conclusions before schools reopen.

Currently, children must undergo the same invasive procedure as adults – a nasopharyngeal swab reaching 7cm into the head through the nose. They also have their throats swabbed.

Data already shows that half of adults do not return for a second procedure to confirm whether they have contracted the virus from a close contact. There is concern the traumatic nature of the process on children could prevent parents bringing them for repeat testing.

By the end of July there were 188 confirmed cases of Covid-19 in children under the age of five in Ireland. Out of a total of 10,200 tests conducted in that age bracket, that represents a 1.84 per cent positivity rate.

Of testing carried out in the population overall, they represent just 0.73 per cent of positive cases. Those aged between five and 18 represent just over 1 per cent.

An expert group headed by Dr Cillian De Gascun is now examining alternative testing methods including a less invasive nasal swab and a cheek saliva swab, the latter of which could potentially be conducted by a parent under supervision.

A second expert medical group is examining whether fever in children – who suffer temperatures far more commonly than adults – might be treated differently so they can avoid immediate Covid-19 testing and lengthy isolation.

It is hoped that both groups will be in a position to reach conclusions before the school year begins at the end of August.

Dr Nuala O’Connor, the Irish College of General Practitioners’ clinical lead on Covid-19, said she would be concerned the current testing method with small children could deter parents from bringing them, thereby undermining a system crucial to monitoring the spread of the virus in Ireland.

Where children were not brought for testing, she said it was imperative they were still taken out of contact with others.

“My hope as a GP is that these [alternative] tests will develop to a stage where they are sufficiently sensitive and specific, and good enough when it comes in particular to young children,” she said.

“If we had a simple, easy-to-administer test that wasn’t traumatic to conduct, I think it would be easier for everybody.”

She compared the experience of the nasopharyngeal swab in children to a blood test given the difficulty in keeping children still during the process.

The second group is examining whether fevers in children might be approached differently, given they are far more common in children, particularly in winter.

“Young children get fevers all the time,” said Dr O’Connor. “On average they get six or seven viral infections during the winter. Hopefully this winter it will be less [given public awareness and caution] but let’s say they get three or four, there may be some leeway in making a clinical assessment so that children can be treated differently.”