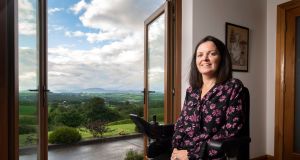 Wheelchair user Catherine Chang says adapting to recent Covid-19 restrictions has shown how public facilities and businesses can be made more accessible for disabled people.

Ms Chang (41), from Letterkenny in Co Donegal, suffers from a progressive muscular disorder known as muscular dystrophy and has been a wheelchair user for the past six years.

She had been working as a welcome adviser in a bank but has been cocooning since March 10th due to coronavirus.

“For disabled people we were constantly being told it’s really difficult to make this accessible and we need planning permission for this, that or the other, and what we’ve seen during Covid is that actually the physical structure of places can be changed really easily and loads of places are doing this,” Ms Chang said.

“It’s not that it can’t be done, it’s just that there didn’t seem to be a will there to do it. It’s great to see the outdoor spaces becoming available because it’s actually going to make a lot of places that weren’t previously accessible to me accessible.”

Ms Chang had been planning to return to work on July 20th but following the postponement of phase four of the Government’s roadmap she has been advised to stay at home. She’ll review the situation again at the end of August.

“Hopefully at that point I can go back,” she said.

“My employer has been excellent in this regard, I’ve had no problems...When I return I probably won’t be in a customer-facing role. I imagine it will be more office based and I wouldn’t be meeting people as I’m still in that high-risk category.”

Ms Chang said she would have concerns about returning to work citing a lack of disabled parking in particular as restrictions have been lifted in recent weeks.

“We do seem to have lost our already limited parking spaces. I’ve noticed they’re blocked off for queuing so that could be an issue when you start going out again,” she said.

“Then also in the office, traditionally I suppose Irish people might still go to work even if they weren’t feeling well. You’re sort of relying on people to do the right thing really.

“However, the fact that wearing a mask has become mandatory would definitely make me feel safer going out again.”

Ms Chang said she has only been out locally and to the shops a few times since the middle of March but believes she may have found it easier to adapt to lockdown due to her disability.

“Up until now I’ve avoided them [shops]. I’m lucky, I live in a rural area so I’ve loads of space, I can go for walks, get some fresh air or whatever. I’m not in a small enclosed space so that helps,” she added.

“You just get into a routine. I think if you have a disability or a chronic illness, you’re somebody who is used to adapting and to living with something that is out of your control, so in that way we’re better equipped than some people to deal with that. You just adapt to it and get on with it.”