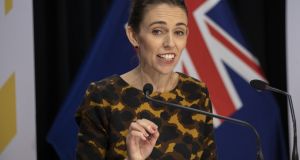 New Zealand prime minister Jacinda Ardern. It is held up internationally as the poster child of disease containment but living with the virus requires a different set of policies, more nuanced ones. Photograph: Mark Mitchell/Pool/Getty Images

Auckland, New Zealand’s largest city, locked down again yesterday after it emerged the country had experienced four new community transmitted cases of coronavirus, the first in more than 100 days.

Citizens were told to work from home unless they were essential workers. Schools as well as bars, cafes and restaurants were closed until at least the end of the week.

So, on the basis of four members of the one family contracting the disease, an entire city of 1.6 million people was placed back in lockdown. Is this not madness?

We can and should follow many of New Zealand’s policies – particularly the country’s testing and tracing infrastructure and prime minister Jacinda Ardern’s proactive stance and straight-talking communications strategy.

But moving in and out of lockdown on basis of a small cluster of cases – does one family even count as a cluster? – is a recipe for economic disaster.

The initial shutdown in the Republic has already triggered a major recession, one that we have yet to feel the full extent of. Nearly 800,000 workers are still reliant on the State for income supports to get by. That’s more than one-third of the workforce.

If we take New Zealand’s example and meet these mini-outbreaks with the sledgehammer of lockdown, we will turn the incoming recession into a depression, one that involves a prolonged period of high unemployment and business closures, which will come with a health warning of its own.

Research, published in the British Journal of Psychiatry, suggests the 2008 financial crisis was linked to 10,000 additional suicides in Europe and North America.

That threat has to be at the core of the Government’s decision-making from here on in, particularly when there are just 14 confirmed Covid-19 cases in the entire acute hospital system here.

Hospital admissions have fallen dramatically in part because most of those who are contracting the disease are younger people who don’t need to be hospitalised in the same numbers.

At the outset, the public health advice was to shutdown for a set period “to flatten the curve” and then to treat resurgences or flare-ups locally via aggressive testing and tracing. This was to preserve the health service from being overwhelmed by an initial spike in cases. That’s been achieved.

Living with the virus requires a different set of policies, more nuanced ones.

New Zealand is held up internationally as the poster child of disease containment. It took the unprecedented step of closing its borders back in February and imposing strict quarantine rules at a time other countries failed to act or even grasp the level of threat. The borders here have never been closed. Airlines just grounded their fleets as no one could travel.

New Zealand, which has a similar population to the Republic – 4.8 million versus 4.9 million – only ever reported 89 cases a day even at the peak of the pandemic: here the daily case load was over 800 at one stage.

As a result, the Republic’s official death toll is 1,773 while New Zealand’s is just 22. There’s no disputing the country’s success in dealing with the pandemic. The figures speak for themselves. Its decision to act early and hard meant it was the first to exit lockdown and return to normal life with full sports stadiums and open nightclubs – a situation most countries are not even close to reaching – though it has maintained strict border controls.

By the same token, the country is 4,100km away from its nearest major neighbour, Australia, and sparsely populated compared with Europe, giving it a unique advantage in containing a pandemic. The Republic, by contrast, has a porous land border with Northern Ireland, a different jurisdiction with a different disease trajectory and its own containment protocols.

The Government last week reintroduced restrictions on Kildare, Offaly and Laois, putting the three counties into a partial lockdown for two weeks on the basis of several clusters in meat processing plants.

However, it’s questionable whether workplaces in these counties with no reported cases should be closed while workplaces in other areas with reported cases are open. Laois can feel particularly hard done by as it reported no new cases on Monday but will remain under economic curfew.

Dr Ronan Glynn, acting chief medical officer, admitted on Monday that these measures were “blunt instruments”. “It’s a fallacy to think that the measures we take are nuanced,” he said.

It may be that the Government is overly concerned with the prospect of schools reopening at the end of the month and is taking no chances with these flare-ups. We must, however, get to the point where these clusters can be dealt with more surgically and without shutting the economy around them.

Might it be better to impose tougher regulations on meat processing plants generally rather than the counties that contain them? That, after all, is the policy being pursued in relation to pubs.

Living with the virus or managing it is likely to involve a prolonged period of social distancing, mask wearing and perhaps permanent changes to the way we interact in shops, at work, or in schools. To presume otherwise is foolhardy.

Even severe containment measures won’t eliminate the virus. New Zealand has just proved that. Talk of a vaccine is premature. When Ireland fully opens up, the virus will still be circulating around the globe and much of the population here will face a renewed risk of infection.

Like it or not, that’s the new normal no matter how many times you lock down.