Full moon on July 5th with Mercury, Venus and Mars in view from Ireland this month 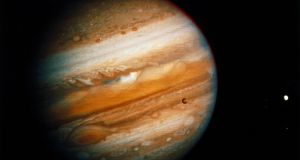 There is a moment in Kim Stanley Robinson’s book Galileo’s Dream when a mysterious stranger prompts the title character to turn his newly acquired spyglass skyward.

Galileo’s companion that evening, we later learn, is a time traveller from one of the Jovian moons that the great scientist himself had discovered.

What emotions must Galileo have experienced as he explored the sky in the winter of 1609/10, when marvels - unknown up to then - were revealed?

Jupiter seemed to be a solar system in miniature, with Galileo noting the regal planet was accompanied by attentive courtiers. Saturn was more of a puzzle though that the limitations of his instruments left it unsolved.

Fastforward to July 2020 and it is a month for solar system giants, as both Jupiter and Saturn become well placed for viewing this month

Any pair of binoculars allows you track Jupiter’s four largest moons - Io, Europa, Ganymede, and Callisto - as tight-in points of light. Their configuration changes nightly, while the number seen varies depending on whether one or more are hidden by the planet’s bulk or passing in front of Jupiter at the time.

Saturn looks slightly elongated in most binoculars, hinting at something unusual about the planet’s shape.

What stumped Galileo was that his later observations coincided with Earth’s passage through Saturn’s ring plane - they are so thin that when we see the rings edge-on every 15 years or so they almost disappear from view except in larger telescopes, which will next happen in 2025.

Modern close-up views of Jupiter and Saturn and their retinue beamed back by robotic spacecraft would have amazed the Florentine scientist.

From fiery Io to billiard ball smooth Europa, along with the mysteries beneath Titan’s opaque atmosphere, there is much still to learn about the gas giants’ families.

Europa, and its 20 km deep subsurface ocean, is one of the observation targets for Europe’s Juice (Jupiter Icy moons Explorer) mission due to launch in May 2022. The Stygian realm beneath the moon’s crust regularly features in science fiction because of its potential to support life.

One plotline of Robinson’s book explores sentience encountered in Europa’s watery depths, and the realisation that humankind - despite our diversity and differences - is just one species amongst many across a consciously connected Universe. And that is a unifying message as powerful today.

Journey to the galactic hub

Our view south in July at 11pm is towards the galactic centre. Unfortunately, it is permanently low on the horizon from our latitude but closer to the equator and from the southern hemisphere the hub’s grandeur is more apparent.

Still, the area of Sagittarius is overflowing with treasures that we can admire from here. Our chart shows just a few easily visible in small instruments but the flipside of the monthly chart from www.skymaps.com lists more.

In binoculars, the Lagoon Nebula’s pale glow wreathes some of the bright young suns that have evolved in this nursery. Panning a little to the upper left brings you to M24, the Sagittarius Star Cloud. This is a region of space less choked with interstellar dust that is a 10,000 light-year long window towards the galactic centre.

Flanking the Cloud are the rich star clusters M23 and M25, while nearby are the additional star forming regions of M16 - site of the famed Pillars of Creation - and M17. In short, the area has an astounding mix of targets for any optics.

An excellent book of observing highlights is The Monthly Sky Guide by Ian Ridpath, while Stars and Planets by the same author and published by Collins is also worth checking out.

Mercury can be picked up in the morning sky from the second half of July, slowly gaining in altitude each day to lie no better than 5° above the north-eastern skyline around 4:45am on the 25th. The crescent moon acts as a guide on the 19th when Mercury is to its lower right.

Magnificent Venus is well up before sunrise. A beautiful close pairing with the waning moon greets early risers after 3am on the 17th. The planet is then near Aldebaran and the Hyades star cluster in Taurus.

Ochre hued Mars has surged in brightness and rises before midnight in Pisces by the end of July. Look for it to the moon’s upper right in the early hours of the 12th. Telescope users can see some surface markings along with the planet’s polar caps.

Jupiter rises in the southeast at 10pm as it reaches opposition on the 14th. Opposition is when the Earth lies directly between a planet and the Sun if you had a birds-eye view of our solar system. The gas giant is dramatically just above the full moon on the 5th, with Saturn a little to the left.

Saturn rises soon after Jupiter and comes to opposition on July 20th, meaning it too is visible throughout the still brief summer nights. The planet’s globe is a little bland for telescope users but seeing the ring system never fails to thrill.

Cream-coloured Jupiter is the brighter of the pair and easily outshines any other star-like object in Sagittarius where it currently lies, whereas Saturn’s tint is a little duller. Telescope users will have to wait a couple of hours for both planets to clear the horizon shimmer before getting a steady view.

The moon is full on July 5th when there is also a penumbral lunar eclipse - the outer shadow of the Earth falls on the face of the moon. The eclipse is only of passing interest however as it is too shallow to notice anything. Last quarter falls on the 12th, while new moon is on the 20th. First quarter is then on the 27th.

World space agencies are busy this month with three Mars-bound spacecraft. First to leave the pad is the United Arab Emirates orbiter Amal (“Hope”) which will be launched from Japan on July 14th. The spacecraft will take seven months to reach the Red Planet. NASA’s Perseverance is next up on July 22nd. The mission comprises a rover like the Curiosity vehicle currently on the Martian surface, but uniquely will have a small autonomous helicopter to extend the range for exploration.

China’s Tianwen 1 (“Heavenly Questions”) also includes a rover along with an orbiter. It is due to fly on July 23rd with arrival at Mars in February next year. Problems with the descent parachute of Europe’s Rosalind Franklin lander and rover has meant its ExoMars mission launch is now deferred to 2022.

SpaceX astronauts Doug Hurley and Bob Behnken are due to remain on the International Space Station until August. The orbiting outpost is in the morning sky at first in early July but then can be seen just after 11pm from mid-month.

Around that time, you can potentially see four passes in a single night! Predictions for your location can be calculated at www.heavens-above.com.

John Flannery (@theskybyeye) is a long-time amateur astronomer with an interest in astronomical history and sky phenomena observable with the unaided eye.

Moon brightens up skies across the worldVIEW HERE