Lasting impact on health outcomes may take years to be seen, says Hiqa 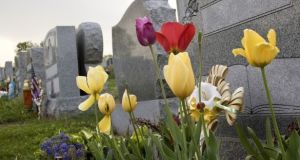 Ireland’s official death toll from Covid-19 may have been overstated, according to a new report that says there was a 13 per cent increase in deaths during the pandemic.

Between 1,100 and 1,200 more deaths than would have been expected on historical patterns occurred between March 11th and June 16th, according to the report by the Health Information and Quality Authority (Hiqa).

However, this is substantially lower than the 1,709 Covid-19 deaths officially reported to the National Public Health Emergency Team (NPHET) over this period.

Data on mortality are usually gleaned from death registration records but because of a three-month lag in this process, Hiqa’s estimate of excess deaths, and other recent estimates during the pandemic, are based on data from the Rip.ie website.

This could be due to the inclusion within official figures of people who were infected with coronavirus at the time of death but whose cause of death may have been “predominantly” due to other factors, it suggests.

At the peak of the crisis, from March 25th to May 5th, 33 per cent more people were dying than normal. During this period, there was an increase of 1,200 deaths from expected figures, but 1,332 Covid-19 related deaths were officially reported.

Over the last four weeks, this trend has reversed, with fewer deaths than expected, Hiqa says. Covid-19 may have accelerated the time of death of frail and vulnerable people over the peak period, it suggests, adding that the current reduced mortality may be due to people have died “earlier than expected”.

“However, it is also possible that the changes to healthcare delivery during the Covid-19 epidemic, such as the suspension of elective activity in public acute hospitals, may have a lasting impact on health outcomes, the effect of which may take years to be seen,” according to Hiqa chief scientist Conor Teljeur.

England and Spain have the highest figures for excess mortality, while Norway, Denmark and Greece have the lowest.

A separate analysis by the Central Statistics Office published on Friday, and also based on Rip.ie data, puts excess mortality at 1,072 up to the end of June.

It notes a “pronounced increase” in death notices on the website in April compared to previous years and says Dublin and surrounding counties were heavily impacted, while there were also increases in Cavan, Monaghan and Donegal.

The CSO analysis also notes a big increase in the use of terms such as “private”, “broadcast” and “webcam” in death notices from March on.

It says Rip.ie can be used to accurately record trends in mortality but points out that usage by minority communities is much lower than the general population.

Deaths reported to NPHET by the HSE include cases confirmed by laboratory tests to have Covid-19 but also probable and possible cases of the disease. A census of deaths that occurred in nursing homes was conducted during the crisis.