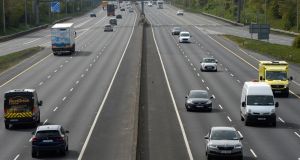 Above, traffic on the M50 in Dublin on April 22nd, 2020.Photograph: Dara Mac Dónaill / The Irish Times

Traffic volumes for cars and heavy goods vehicles (HGVs) are returning to pre-Covid-19 levels, but people are slower to return to public transport as restrictions are lifted, new figures from the Central Statistics Office (CSO) show.

According to the CSO travel bulletin, published on Friday, the volume of cars on the roads was more than 70 per cent lower in the weeks when restrictions were most stringent (from March 29th to May 2nd), when compared to the same period last year.

As restrictions eased, car traffic volumes increased, but they have not gone back up to 2019 levels.

Data for between June 21st and June 27th shows that car traffic volumes at regional sites and in Dublin remain almost one-third lower than for the same week in 2019.

The number of passenger journeys on public transport dropped “dramatically” since the start of the Covid-19 crisis, the statisticians found.

The report added that it is “worth noting” that the number of journeys taken on public transport is not recovering at the same rate as road traffic volumes.

In the week beginning March 1st, there were more than 5.5 million passenger journeys on public transport, compared to 1.7 million during the week of June 21st.

The impact of Covid-19 restrictions on HGVs was not as pronounced as for cars or public transport.

In the first three weeks of March, leading up to the severest restrictions, HGV traffic volumes in Dublin and in regional locations were higher than in 2019, although HGV traffic volume was decreasing in those weeks.

Between March 29th and May 9th, the volume of HGVs on Irish roads was 30 per cent lower when compared with the same period last year.

However, since May 24th, HGV traffic in Dublin has returned close to 2019 levels and the volume of HGV traffic measured in regional locations last week was just 2.3 per cent below 2019.

The year-on-year comparisons of HGV volumes in mid-April was affected by the timing of Easter, the bulletin added.

Meanwhile, the report also acknowledged the number of road fatalities between January and June was higher in 2020 than last year, up from 70 in 2019 to 73 this year.

Traffic volume was measured using traffic counter data from selected sites around the country. Vehicles are counted when they pass over loops embedded in the road surface and the traffic counters then distinguish between different vehicle classes.

The number of car trips on the State’s main roads is still up to one third below this time last year, despite the increase in mobility permitted by the easing of the Covid-19 lockdown.

In the initial three weeks following the introduction of the March 27th restrictions, traffic volumes were typically down approximately 65-70 per cent across the national road network.

But from April 21st, an upward trend in car traffic volumes became apparent. This week car traffic volumes at a sample basket of counters across the network showed significantly stronger growth than last week, with many roads showing increases in car volumes in the order of 7 per cent.

The increase follows the relaxation of restrictions of movement of people within the State.

Based on an analysis of Thursday’s figures, car traffic is closest to levels experience one years ago on the N40 Cork Southern Ring Road (Kinsale Road to Douglas). Volumes on the route, rose 7 per cent in the last week but remain 28 per cent below those on July 2nd last year.

Car traffic just south of the Border on the N1 at Jonesboro was up 5 per cent in the week to Thursday, but the overall year’s reduction in car traffic at this counter was 36 pe rcent.

Traffic on the N6 Bóthar na dTreabh, in Galway, has grown 7 per cent in the last week but is still 30 per cent lower than this time last year.

The M7 at Limerick Southern Ring Road, Ballysimon to Rosbrien, has also seen volumes increase by 7 per cent but the route is down 32 per cent on last year.

The M9 Mullinavat to Waterford was another road that saw growth of 7 per cent in the last week. But overall it was down 34 per cent on last year.

The analysis of traffic counters, which are set in the national and motorway roads, shows weekly heavy goods vehicle traffic has remained largely stable.

Transport Infrastructure Ireland, which maintains the data, said much of its data was now available online. The authority issues a daily summary of the morning peak which is published online in the early afternoon.

A spokesman said growth in vehicles numbers had been “pretty consistent” across the network since April.