Council cites weekend attempt to spark recovery, but some ‘don’t feel consulted at all’ 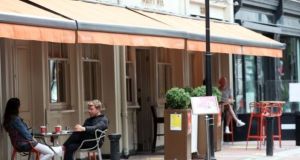 Duke Street is among several streets to be closed to weekend traffic. File Photograph: The Irish Times

Several streets on Dublin city centre’s south side are to be closed to weekend traffic in an experiment to see if economic activity can be revitalised after devastation wrought by coronavirus.

The targeted area around Grafton Street will include parts of South Anne Street, Duke Street, South William Street, Drury Street and Dame Court. The trial will shut off traffic between 11am and 7pm for four weekends from July 25th on a trial basis.

Dublin City Council, which published details of the plan on Thursday night, said the step is designed to provide space for safe movement of people and to help businesses.

“To support the economic recovery of the city it is proposed to provide more space for pedestrians during the weekend to encourage people to return to shop and enjoy the city centre,” it said of the move which is part of a broader strategy.

“Pedestrian numbers throughout the city have fallen dramatically since early March. And although numbers have increased slightly in the last number of weeks, footfall is still well below average.”

Figures provided by the authority show that although footfall on Henry Street, a popular shopping area on the north side, had returned to about half of its pre-coronavirus level, the Grafton Street area was at 20 per cent of previous activity.

Businesses can apply to put out additional temporary seating on the newly created carriageway, but existing footpaths will remain clear.

Public transport and taxi ranks will operate as normal and loading will be facilitated until 11am. On-street parking will be suspended in much of the affected area although public car parks will remain accessible.

The news prompted a widespread positive reaction on social media. On Twitter, coffee shop owner Karl Purdy said a full week would have been preferable but acknowledged the “fast-tracking” of the plan.

However, not all local reaction has been positive. “It’s a very, very difficult area in terms of anti-social behaviour and large gatherings of people,” said Cllr Mannix Flynn.

Jean Martin Deniau, who owns an antiques shop in the Powerscourt Townhouse Centre, said he is worried that any disincentive for people to drive would affect his more mature client base.

“I don’t feel I have been consulted at all,” he said. “If it goes ahead I think most people would be totally taken by surprise; they have no idea this is coming.”

A council spokesman said any businesses with concerns could contact them by email.

“We have had numerous requests from businesses in the area and from business groups to undertake this trial,” he said. “It is a response to the circumstances which businesses now find themselves in due to Covid.”