‘I want my staff to work without fear. A mask will not prevent us delivering great service’ 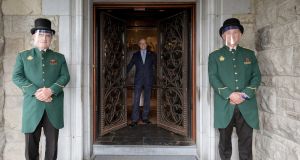 “The juice sommelier will be with you shortly,” says Ashford Castle’s restaurant manager Robert Bowe as he seats me by a window in the dining room.

A juice sommelier? Is that a thing now? It certainly is in one of Ireland’s grandest hotels, one which reopens this weekend after more than 100 days in the most elegant of mothballs.

The role was created because the breakfast buffet has been claimed by Covid-19. And with it has gone the simple pleasure of pouring whatever juice that takes your fancy of a morning in a swish hotel.

Bowe stands by the tableside wearing a full face visor and points at the crisp linen napkin. “Normally I’d flip that for you but with social distancing and all that,” he says.

He gestures towards the breakfast menus and a card embossed with QR codes. “If guests prefer to get the menu on their phones and make the experience completely contactless they can scan those,” he explains.

Then the cheery juice sommelier arrives wearing an Ashford face mask and wheeling a cart of brightly coloured bottles sitting on a mountain of ice. He runs through the options before mischievously adding “A glass of champagne, perhaps?” It’s not yet 9am. Welcome to a different world.

Since Ashford closed on March 19th, its general manager Niall Rochford has been plotting a complex course between evolving coronavirus rules and a fierce determination to provide the service for which the hotel is famed. As go-time nears it’s clear he and his team have pulled off what even he thought could not be done three months ago.

“If you told me in March we’d have staff in masks, I’d have said ‘No way!’”, he declares from behind his own face visor. “But I think they work and I like how you can see our faces; that connection is so important. We have masks too. I want my staff to work with confidence and without fear. A mask or a visor will not get in the way of us delivering great service.”

He says the cleaning routine hasn’t changed that much. “We’ve always done it. Although some things we did were in the background and will become more visible. There will be more overt cleaning because that gives guests an extra level of reassurance.”

Guests will see reassurance at every turn from the moment they drive through the granite gates to be greeted by a smiling gatekeeper in personal protective equipment. The pen used to sign check-in papers is sanitised before and after each signature and sits in a sanitised holder. The “covid gift pack” with its surgical mask, hand sanitiser and gloves is tastefully presented in a glossy Ashford bag.

The social distancing is impeccably observed and the hand sanitiser bottles sprinkled around the common areas serve as a constant but gentle reminder to guests that everyone has a role to play in keeping all safe.

The expansive wine list comes in the form of an electronic tablet while breakfast time slots have to be reserved with access to the spa, pool and cinema carefully monitored. The television remotes have always been santisied but now there are notes on the sherry decanters assuring guests they have been poured exclusively for them while notes on the in-room magazines offer a similar assurance to guests that they will be only ones to read them. What little Plexiglass there is comes adorned with the Ashford logo. One of the most noticeable things about the safety measures rolled out is how fast they stop being noticeable.

Almost all of the talk about reopening Ireland in recent weeks has focused on process. But in Ashford what is most striking are the people behind the process. The excitement and emotion among staff is hard to miss as they wander halls and prepare to greet guests.

‘I just burst into tears’

Wednesday was a return to work for Paula Carroll, the hotel’s head of marketing, and as she talks about her her first sight of the castle on the horizon when rounding that final bend her voice cracks and her eyes tear up. “I was so emotional. I’d butterflies and then I saw the staff lined up and just burst into tears. It is so wonderful to be back I could cry again.”

“You could add the Gulf War, 9/11, Sars [the 2002-2004 severe acute respiratory syndrome outbreak], and the economic crash of 2008 all together and double it and this would still be worse,” she says. “And we were about to have the best year in the history of the hotel too.”

Even as 50 of the hotel’s 83 rooms reopen, Rochford knows getting back to normal is only starting and will be difficult. The hotel will not have the well-heeled Americans who comprise a significant portion of its guest book. As many as 360 private planes land in Knock Airport annually, carrying Ashford-bound passengers and about 80 per cent of its custom base is from overseas.

“Things will be difficult. We know that and it will be at least three years before we get back to where we were,” says Rochford before heading off to put the finishing touches to his big weekend and the start of the road back.