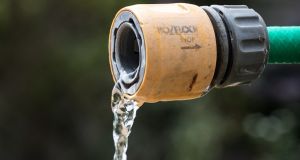 Irish Water is reviewing the need for a water conservation order, also known as a hosepipe ban, due to the heavy rainfall and improving groundwater conditions in recent weeks.

The utility imposed the conservation order on June 9th, and it was expected to remain in place until July 21st. The order was put in place to “safeguard” water for essential purposes in light of the unseasonably dry weather.

Met Éireann confirmed that May 2020 was the driest since 1850 and continued dry weather was forecast.

Some 27 of Irish Water’s 900 drinking water schemes, were in drought with another 50 at risk of going into drought when the conservation order was introduced.

The situation “deteriorated rapidly” thereafter, with the number of schemes in drought or at risk of drought peaking at 98, Irish Water said.

However, there has been above average rainfall in many areas of the country over the past couple of weeks, which has resulted in the recovery of some of the water supplies that were in drought or at risk of drought.

Currently only 22 schemes remain in drought and a further 63 are at risk. While the overall numbers are trending downwards, the situation is not uniform across the country, Irish Water said in a statement. Irish Water said it is continuing to monitor these water sources “as their recovery is fragile and subject to change”.

The utility will again meet with Met Éireann, the office of public works, the environmental protection agency and other key stakeholders to discuss the impact of the recent rainfall with consideration to lifting or partially lifting the water conservation order early next week.

Niall Gleeson, managing director of Irish Water, said while some areas of the country have had significant rainfall, it “has not been equally distributed in all of the areas that are most in need”.

“ It is encouraging to see the improvement in so many of the water sources, but this recovery is fragile,” he added.

Mr Gleeson said that in order to implement a water conservation order, Irish Water needs to be of the opinion that “a serious deficiency of water available for distribution exists or is likely to exist”.

“ We are now in a position where we need to judge whether the deficiency of water continues to satisfy the criteria set out in the Water Services Act and if this criteria can be applied nationally or whether we can remove the Water Conservation Order for certain parts of the country,” he added.

Mr Gleeson thanked the public for their water conservation efforts over the past number of weeks, adding that it is “still essential” that members of the public continue to conserve water.

1 Wife not entitled to deceased husband's entire estate, High Court rules
2 Coronavirus: From midnight Dublin will move to level three until October 10th - Taoiseach
3 President Higgins says British must face up to their history of reprisals
4 Life in Level 3: What will happen under new restrictions in Dublin?
5 Coronavirus: Public health experts considered idea of moving Dublin to Level 4
Real news has value SUBSCRIBE