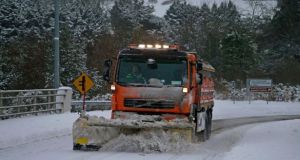 A snow plough on the N11 at The Glen of the Downs on Friday morning. Photograph: Nick Bradshaw.

As the snow melts, the Dublin and Wicklow Mountain Rescue service has warned against “snow tourism” and asked drivers of 4x4 sports utility vehicles to stay away from high ground.

The Sally Gap area of the Wicklow mountains in particular is a favourite attraction for users of 4x4 vehicles who think their vehicles can handle conditions at 550-metre high crossroads on the ridge of the mountains, according to the rescue service.

Spokesman John Kavanagh said while snow was melting in Dublin city and suburbs and at sea level, snow was still frozen at the higher levels up in the mountains and would not begin to melt for some days.

Drifts remain several metres high and it is frequently not possible to discern where the road is, he said. It was therefore not safe, he added.

However, the mountains have a history of attracting drivers of 4x4 vehicles, with the Dublin and Wicklow Mountain Rescue having to venture out in blizzard conditions.

In 2009 a man whose 4x4 skidded on packed snow and became embedded in a ditch walked until he met two other men in a Rover Discovery.

The three were also joined by a man whose car had also become stuck. When the Discovery too became stuck the four were forced to cut arms of a wet suit so it could be shared as they tried to keep warm while spending the night in the snow. Rescue workers could not reach them and advised over the phone to keep engine exhaust pipes clear of drifting snow. The men were ultimately rescued by helicopter having been found by rescue workers using skis.

In 2010, two men whose 4x4 skidded into a ditch sought assistance from two other men whose 4x4 also got stuck in the ditch while attempting to pull the first vehicles out.

In 2012 another 4x4 driver had a miserable night before being rescued by 4am after his vehicle became stuck.

Dublin and Wicklow Mountain Rescue spokesman John Kavanagh such incidents are a regular part of the team’s winter call-outs each year and were all eminently avoidable.

While many of these are unfortunate incidents experienced by motorists making legitimate journeys, Glendalough Hotelier Pat Casey said the Sally Gap was an unfortunate attraction for young men in 4x4 vehicles who he said were engaging in “snow tourism”.

Mr Casey has been trying to get the Garda or the council “or whoever” to put barriers across the Sally Gap road to prevent users of four wheel drive vehicles from testing them out when snow comes.

“They go up driving about in the snow, underestimate it and get stuck.Then it is the mountain rescue people who have to come out to rescue them. If we had a barrier across the road that could be closed when it snows it would prevent that but nobody wants to take responsibility for it he said.

In recent winters a number of vehicles that had to be abandoned on the the Sally Gap due to snow and ice were vandalised.

Last year two cars were found with their windows smashed, seats ripped and batteries removed. The Glen of Imaal of Mountain Rescue Team has previously warned that cars being vandalised on the Sally Gap is “a regular occurrence”.

Meanwhile, the editor of the Wicklow Times newspaper has criticised “snow tourists” for putting their own lives at risk along with the resources of the emergency services.

Shay Fitzmaurice told RTÉ’s Today with Sean O’Rourke show that the Roundwood to Kilmacanogue road had to be closed by gardaí after cars were parked on the side of the road as walkers went to the Sally Gap, which then prevented snow ploughs from getting through.

“It was stupid. Why take your car out, put your life at risk or the resources of the council and mountain rescue?”

1 Ireland among countries urged to consider reinstating restrictions
2 Sinn Féin apologises as member resigns over social media abuse
3 Coronavirus: Non-essential travel from US set to be banned within days
4 Prisons see huge increase in ‘hooch’ seizures during lockdown
5 Covid-19: We must be hunters of the virus - not its prey
Real news has value SUBSCRIBE