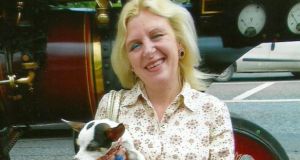 Tina Satchwell: has been missing from her home on Grattan Street in Youghal since March 20th, 2017. Photograph: Irish Examiner

The search by gardaí investigating the disappearance of Cork woman Tina Satchwell (45) will cover a 40-acre area of Castlemartyr wood, a 200-acre forest between Midleton and Youghal.

Gardaí had planned to begin searching the area of Castlemartyr wood last Friday but were forced to abandon their plans when Storm Emma hit the country and covered area in snow.

Officers have cordoned off the entrance to the woods with temporary fencing and have brought in generators and portaloos. They will be using equipment which can detect if earth has been disturbed or soil broken.

The investigation team under Supt Colm Noonan is due to a hold a press briefing in Midleton Garda Station on Monday but it’s understood the search was prompted by the receipt in the past month or so of information which gardaí believe may be relevant to their investigation.

Ms Satchwell has been missing from her home on Grattan Street in Youghal since March 20th, 2017 when her husband, Richard returned from a shopping trip to Dungarvan and found she had left the house and he reported her missing to gardaí four days later on March 24th.

Mr Satchwell told in a number of media interviews how he waited a few days before reporting his wife’s disappearance as he thought she may have needed to “get her head straight” after what he said were several months of anxiety.

Castlemartyr Wood is owned by Coillte. The Garda’s Cork North Divisional Search Team comprising 16 trained searchers are due to begin a planned search of the woodland which extends from the N25 Cork-Waterford motorway south to Ladysbridge.

It’s understood that preparation for the search has been ongoing for the past month or so and search teams have been advised that the search may last at least two weeks as gardaí try to solve the mystery of Ms Satchwell’s disappearance.

News of the planned search broke on Friday when it was originally scheduled to hold the search, leading to much comment on social media which resulted in gardaí securing the wood over the weekend in case anyone attempted to interfere with a possible crime scene.

A Garda cordon was put in place with gardaí protecting the main entrance to the wood off the N25 near Castlemartyr as well as a pedestrian entrance on the Ladybridge side to ensure that no one interfered with the planned search site.

This latest search will be the second major search by gardaí for Ms Satchwell and follows a search by divers from the Garda Water Unit of an area off the Youghal quays and a search of scrubland near Golf Links Road in the town last August which failed to find any trace of the missing woman.

Privately, gardaí admit to being perplexed by the disappearance of Ms Satchwell as she has no history of going missing and they describe her disappearance as “out of character” for a woman who was devoted to her two dogs and a parrot whom she left behind.

Garda technical experts carried out a forensic examination of the couple’s three storey home at Grattan Street and the couple’s car in early June but the examinations found nothing suspicious to suggest that Ms Satchwell had been the victim of foul play.

Gardaí also examined CCTV cameras from around Youghal but could find no footage showing Ms Satchwell, who is 5 ft 6 in tall with blonde shoulder length hair, while internal CCTV footage from Bus Éireann buses servicing the town also yielded no sign of the missing woman.

Ms Satchwell, who left her mobile phone at her house, did not have a passport but gardaí have checked ferry ports and airports to see if she may have travelled to the UK where she first met Mr Satchwell when she lived in Leicester 26 years ago but they have found no sighting of her anywhere.