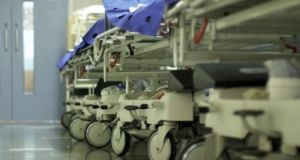 It had been expected that the number of patients on trolleys would surge this week in the aftermath of the severe weather over recent days. Photograph: iStock

As overcrowding in hospitals surged on Monday to near-record levels, Minister for Health Simon Harris urged the public to use the health service only in cases of emergency.

Nurses said there were 664 patients on trolleys in emergency departments or on wards on Monday awaiting admission to hospital beds.

The figure is just short of the record levels of overcrowding experienced in hospitals at the beginning of the year.

Senior health service figures said the number of people on trolleys had reduced to 362 on Monday afternoon from 507 in the morning, based on the HSE’s method of calculation.

The Minister said this would be a difficult and challenging week for the Irish health service.

He said there was a huge build-up in hospitals across the country.

The health service had gone through a number of days in which it was just not safe to discharge some patients due to adverse weather conditions, he said. And, in some cases, patients could not be sent back to nursing homes or others could not access home help services.

Mr Harris said it was going to take a number of days to clear the backlog.

He said “the best way to support frontline staff would be for people to try to only use health services if it is an emergency”.

He said people should look at other options such as attending their GP or going to local injury units rather than presenting at hospital emergency departments.

The Minister said he would ask the Irish people to be understanding about the current situation which was the result of the “direct overhang of a number of days of adverse weather”.

Everything that could be done was being done to address the situation, he said. And there would be a huge focus this week on driving down the number of delayed discharge patients in hospitals and to help get people back to their communities.

The Irish Nurses and Midwives Organisation (INMO) said there were 63 patients deemed by doctors to require admission waiting for beds at Cork University Hospital.

The INMO said there were seven children on trolleys awaiting admission at Temple Street hospital and a further three at Our Lady’s Hospital in Crumlin.

In the main Dublin hospitals the largest level of overcrowding was recorded on Monday at Connolly Hospital in Blanchardstown where 43 patients were on trolleys or wards awaiting admission to hospital beds.

There were 38 patients on trolleys and wards in need of admission at Tallaght hospital.

It had been expected that the number of patients on trolleys would surge this week in the aftermath of the severe weather over recent days.