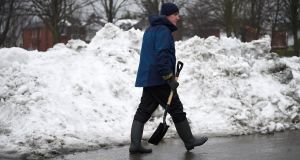 A man walks past cleared snow in Dublin on Sunday. Photograph: Clodagh Kilcoyne/Reuters

Motorists and commuters have been warned remaining snow and ice is causing hazardous road conditions on Monday, while a new orange weather warning was issued for Leinster.

The new alert from Met Éireann is in place until 10am on Tuesday and warns of deep lying snow, a “continuing potential for localised flooding due to the thaw”, and frost and icy conditions overnight.

While snow has disappeared from many areas, other areas in the midlands and southeast remain under a heavy blanket of snow.

Public transport is running across the country, with some local diversions where required due to poor conditions within estates and off main roads.

Dublin Bus told commuters to expect delays to the service during rush hours, but most routes are operating on a normal schedule. There are disruptions to some bus routes due to poor road conditions, particularly in the west and southwest areas of Dublin.

The Luas is running with a slight delay, and park-and-ride users have been warned leftover snow may reduce the number of parking spaces available.

AA Roadwatch is reporting slush on roads causing motorists some difficulty, conditions are particularly poor in Kildare, Wexford and Waterford.

By Monday morning all lanes on the M7 were reopened, after parts of the motorway had been closed on Sunday to clear snow from the road.

Irish Rail is running a full schedule, with just two routes still cancelled: the Limerick-Ballybrophy via Nenagh, and the Waterford to Limerick Junction line. The rail network hoped to have both routes running by later on Monday, until then bus transfers will be in operation.

Bus Éireann are also running a next-to-full service, with some delays due to road conditions.

Water rationing could also be rolled out across the State this week as Irish Water struggles to cope with the twin threats from a dramatic increase in demand and significant mains leaks caused by pipes burst over four days of snow and ice.

The company is to put restrictions on water supply across the Dublin region and neighbouring counties from 7pm on Monday night until 7am on Tuesday, in order to reduce pressure on reservoirs.

It said overnight restrictions on water will likely be in place in these areas for a number of weeks.

Although water shortages are possible in homes, an excess of water elsewhere is also possible as thawing snow mingles with heavy rainfall, which may lead to localised flooding, the National Emergency Co-ordination Group (NECG) warned on Sunday.

Met Éireann said sunny spells through Monday would lead to further thaw and heighten the potential for flooding.

Tuesday is set to be a cloudy day, with temperatures between 5 and 8 degrees.

There are only a small number of power outages across the ESB Networks grid, with main disruptions from the severe weather now repaired.

Milk collections have been curtailed in certain areas due to access difficulties, and some farmers are now at, or close to, storage capacity. While shops are in the process of restocking milk and other fresh produce, it may be a number of days before supplies return to normal levels.

The health service will be put under considerable pressure as it tries to manage the aftermath of the severe weather, with an anticipated surge in people presenting to emergency departments who could not do so last week due to the snow.

All non-urgent surgery on Monday was cancelled by the Health Service Executive (HSE). The heavy snowfall caused delays discharging patients last week, which has led to a backlog.

The next two weeks should be declared an “emergency” period in Irish hospitals, Phil Ní Sheaghdha, head of the Irish Nurses and Midwives Organisation has said.

“This means extraordinary measures should be put in place to focus on recovering from this adverse weather event, ensuring prioritisation of emergency care and this will require all non-urgent and routine cases to be cancelled during this period,” she said.

Vulnerable people are being prioritised by the HSE as services resume following the extreme weather conditions last week.

Damien McCallion, the HSE’s national director of emergency management and the National Ambulance Service, said that while outpatient services will resume today, the backlog of cancelled appointments will not be rescheduled until the week after next.

He told RTÉ’s Morning Ireland that the HSE was also concerned about staff fatigue as many “did not see their homes for three days” last week as they stayed close to and in hospitals.