Child aged under two among the four victims of blaze at bungalow on Molly Road, Derrylin 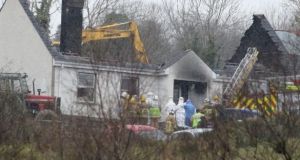 Last Tuesday morning’s fire is understood to have claimed the lives of three generations of the same family. Photograph: Brian Lawless/PA

A 27-year-old man has appeared in court charged with murdering four people, including a toddler, in a fatal house fire in Co Fermanagh last week.

Daniel Sebastian Allen, of Molly Road in Derrylin, is accused of four counts of murder on February 27th.

Enniskillen Magistrates Court was told that the victims are currently unidentified. The accused faces a further charge on the same date of arson with intent to endanger life at the same property, which belongs to Thomas Fee.

Mr Allen stood as the charges were read out in court during the brief hearing. When asked if he understood the charges against him, he replied: “Yes”.

Det Insp Brian Maxwell said he could connect the accused with the charges before the court. Defence solicitor Gary Black said no application for bail was being made.

District Judge Nigel Broderick remanded the accused in custody. He will appear in court again via video-link on March 26th.

Mr Allen was detained by police at the scene of last week’s early morning fire and had been under police guard in hospital before being moved into custody for questioning. The fire is understood to have claimed the lives of three generations of the same family.

The landlord of the property, Mr Fee, has publicly named the victims as Crystal Gossett (44), her children Diane (19) and Edward (16), as well as Diane’s daughter, who is believed to have been less than two-years-old.

The family were originally from Doncaster in England but had previously lived in Co Kerry before moving to Fermanagh around a year ago.

Investigations into the fire are continuing and postmortems will take place in order to positively identify the victims. Police are still appealing for people with any information about the residents of the property to get in touch.