Nine men charged in connection with looting in Tallaght 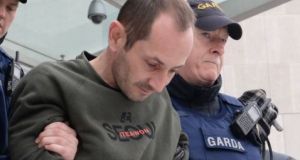 David Bernie (36) from Suncroft Park, Tallaght, who was charged with trespassing and causing criminal damage at the Centra Store, on Kiltalown Way, in Tallaght on Friday night. Photograph: Dara Mac Dónaill

Nine men were charged in connection with two separate incidents of burglary of stores in Tallaght, west Dublin on Friday evening.

Six men were charged with offences relating to the burglary of a Lidl store, on Fortunestown Lane, Citywest, and all were granted bail.

John Kelly (47) from Allen Hall, Belgard Square, Tallaght, was charged with handling stolen property from the store, at a special sitting at the Criminal Courts of Justice on Saturday.

The court heard Kelly was recently widowed, and looked after his two sons, who were aged 16 and 21. He was granted bail on “stringent conditions”.

Paul Freeman (43), with an address on Russell Green, Tallaght, was arrested on Fortunestown Lane, and charged with trespassing in the grounds of the Lidl store with the intent to commit an offence.

The court heard that after he was read his charge sheet, he told gardaí: “I wasn’t there to be stealing or robbing anything, I have my own house. I don’t need to rob anything.”

Edger Cesynas, a 24-year old from Lithuania, of Silken Park Drive, Citywest, was charged with the theft of groceries worth €50 from Lidl. Garda Fiona Morgan told the court there was no objection to granting Mr Cesynas bail, but he should be required to sign in to Tallaght Garda Station twice a week.

Povilas Gneizevicius (20), also a Lithuanian national, with an address at St Mochta’s Drive, Clonsilla, was charged with possession of stolen groceries worth €60. He had a second charge of theft from the Lidl store.

He was granted bail on the condition he stay away from the Dublin 24 area, and sign in at Blanchardstown Garda Station three times a week.

Gerard Buggle (38) of Mac Uilliam Lane, Tallaght, was charged with the theft of goods worth €70 from Lidl, which included LED lights, four packets of tealights, and running shoe insoles.

Keith Kelly (46) of Suncroft Park, Tallaght, was charged with trespassing on the grounds of the Lidl store, with intent to commit an offence.

Another three men were charged in connection to the burglary of a Centra Store, on Kiltalown Way, in Tallaght on Friday night.

Mohammed Smew (25) of Milners Square, Santry, was charged with possession of a weapon, and causing criminal damage while trespassing.

Mr Justice John O’Connor refused a bail application, and remanded Mr Smew in custody until a sitting of the Cloverhill District Court on March 8th.

John Doyle (37), of Russell Walk, Russell Square, Tallaght, was charged with trespassing and causing criminal damage in the Centra store.

David Bernie (36) from Suncroft Park, Tallaght, was also charged with trespassing and causing criminal damage in the store.

Shouting in the courtroom, Mr Bernie said, “we are not the ones who broke into that shop and CCTV will prove that”.

Both Mr Doyle and Mr Bernie were refused bail, ahead of respective court hearings on March 8th.