HSE says vulnerable people will be prioritised as services resume 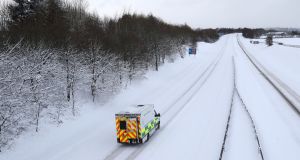 Many hospital appointments were cancelled in the snow: File photograph: Andrew Milligan/PA

Vulnerable people are being prioritised by the HSE as services resume following the extreme weather conditions last week.

Damien McCallion, the HSE’s National Director of Emergency Management and the National Ambulance Service, says that while out patient services will resume today, the backlog of cancelled appointments will not be rescheduled until the week after next.

He told RTÉ’s Morning Ireland that the HSE is also concerned about staff fatigue as many “did not see their homes for three days” last week as they stayed close to and in hospitals.

Mc McCallion said that all non urgent surgeries have been cancelled but that out-patient services will resume today, except in Wexford. He added that vulnerable people will be prioritised and that it is hoped that community services will be back up and running.

However, he warned there could be regional difficulties. He pointed out that every day there are 13,000 outpatient appointments. Losing two days last week means that there are now at least 26,000 appointments that have to be rescheduled.

He also wanted to reassure people that the priority of their procedures will not be lost in the rescheduling. “They will be prioritised again once we deal with the recovery and rescheduling.”

Mr McCallion also encouraged people that if they have an emergency situation to contact the emergency department or GP service.

He praised all the emergency services for their efforts to ensure ambulances were able to attend where necessary. He highlighted efforts in Wexford involving numerous groups to get four dialysis patients to hospital for their essential treatment.