The man with a finger in many pie charts

Ever wondered how pie and bar charts came to be? A single Scot, William Playfair, invented them 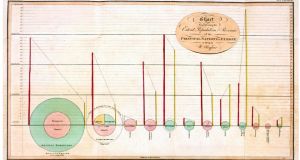 Pie chart: One of William Playfair’s designs, representing the extent, population and revenue of the principal nations of Europe in 1804

I have a confession. I never actually considered the origin of graphs or pie charts. It never occurred to me that they had any history at all, I probably assumed they were as old as mathematics. In fact, a single person invented several of the most common methods of data visualization that we use today.

William Playfair was born in Scotland in 1759. As an adult, he worked for the Birmingham engineering firm of Boulton and Watt. One of the founders was James Watt, a fellow Scott and the inventor of an early steam engine with separate condenser. The company manufactured engines that helped to drive the English Industrial Revolution. Similar to Watt, Playfair combined an intellectual interest in science with commercial enterprise.

Unlike Watt, his commercial enterprises were not successful. They included a silver-plating business, a French colony in Ohio, and several financial schemes. However, he continued to publish on a wide range of topics throughout his life. He seemed to have a particular love for statistics. It was his struggles to represent data in his publications that led to his invention of a type of line graph, the bar chart and the pie chart.

Consider how often you see or use a bar or pie chart. They are favoured ways of showing data in newspapers, including this one. Part of the reason is how easily they seem to convey relatively complex data in visual form. We understand in a blink the proportions conveyed by a pie chart. A table of numbers would never be as effective. Bar charts make simple, for example, a comparison of the approval ratings of the last dozen US presidents during their first 100 days (hint: Trump’s is worse than the notoriously disliked Gerald Ford).

Playfair pioneered the charts as ways of solving particular problems. Over the course of the 18th and 19th centuries, governments and individuals had begun to collect huge amounts of statistical data about society and economy. Playfair was interested in popularising statistics; “a knowledge of which is necessary to the well understanding of the history of nations, as well as their situations relatively to each other”. He wanted these statistics to inspire the mind “to work, to reason, and think” and he felt that statistical tables failed by making the mind “merely passive”. Visually clear proportions, he thought, would lead people to clearly compare nations in different ways.

Playfair’s Statistical Breviary, published in 1801 and quoted above, contained the first use of a pie chart as well as recurrent use of different sized circles to indicate proportion. (The entire book is available to read on archive.org, but the foldout pages with charts have not been scanned correctly for viewing.) The use of proportional circles is now a common way to express data on a map, for example.

Playfair was particularly interested in the relationship between a country’s size, tax income and population. He saw this as a comparison of the relative power and success of each country over time. The first pie chart was used to show what proportion of the territories of the Ottoman Empire lay in Asia, Africa and Europe. A different way of visualising the division of territories between continents was used in the case of the Russian Empire where a circle representing the European territories was enclosed by a much larger circle representing the Asian territories. The circles were placed at the bottom of a bar chart that showed the tax income and the population of each country.

What Playfair was most eager to show, of course, was the superiority of the United Kingdom in terms of tax revenue for a small territory with a small population. This took no account of overseas Empire, considering only the islands of Britain and Ireland. The proportional circles are striking in their ability to convey information. Indeed Playfair had been reassured of their usefulness by showing them to friends who apparently “declared that till they saw it, they had no right and distinct idea of the proportional extent of the different countries”. Apparently even his scientific and intellectual friends admitted that it was difficult to mentally compare “quantities expressed in words or figures”.

Although Playfair’s charts were not immediately taken up by others, he was correctly convinced of their originality and importance. Looking at them it is hard not to ask yourself why no one had thought of that before.