Garda whistleblower has been at centre of political, media and justice focus for decade 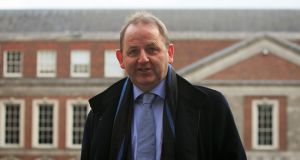 There are two ways in which to think about the Charleton Tribunal, which is examining whether there was a smear campaign against Garda whistleblower Sgt Maurice McCabe.

The first is the obvious one. The tribunal is mainly an inquiry into whether senior figures in Garda HQ were out to get McCabe because they disapproved of his whistleblowing activities. So all of the evidence should be measured against whether it supports or undermines this core allegation.

The second way of viewing what is going on at the tribunal is to consider it an opportunity to look more closely at a controversy that has been causing mayhem for years in our political, policing and justice system.

Much of the mayhem has been based on media reports and political debate about matters that were not in public view. The tribunal changes this. It provides an opportunity to replace suspicion and allegations of conspiracy with evidence heard in public.

The McCabe saga has contributed to the early end of the careers of a taoiseach, two Garda commissioners, a minister for justice, and two secretaries general of the Department of Justice. As recently as November last, it provoked the resignation of then tánaiste Frances Fitzgerald and came close to bringing down the Government. It is a many-headed hydra which, it appears, cannot be put to bed. The tribunal presents an opportunity to ponder why this is so.

One of the impressions emerging to date from the tribunal in that regard is a tendency for matters concerning the Garda whistleblowing story to engender a type of hysteria.

There was a hint of this last month when Fitzgerald, who was minister for justice when the tribunal was established, was asked in the witness box by tribunal chairman Mr Justice Peter Charleton, about the term of reference he was then hearing evidence about. It asks whether a false claim of sex abuse was used by then Garda commissioner Nóirín O’Sullivan to discredit McCabe at the private hearings of the 2015 O’Higgins Commission (the answer is no). Asked where the idea for including this in the terms of reference had come from, Fitzgerald replied:

We have already had a module of the tribunal that investigated concerns about the treatment of Garda Keith Harrison. One of the claims Harrison made was that the child and family agency, Tusla, was used by the Garda to get at him. The tribunal found that all Harrison’s claims were “entirely without any validity”.

The tribunal has also looked at how Tusla came to create a false sex abuse report in 2013 concerning McCabe. The tribunal’s findings on that issue are due shortly. From the evidence, it appears likely the tribunal will come down on the side of the multiple cock-up scenario, rather than any conspiracy involving Tusla and Garda HQ.

There is an entirely separate term of reference for the tribunal whereby the Oireachtas has charged it to investigate any “pattern of the creation, distribution and use by Tusla” of files containing criminal allegations against Garda whistleblowers. Given what has already emerged in evidence about Harrison and the 2013 McCabe Tusla file, that is a term of reference that would now appear to have absolutely nothing to justify its existence.

None of the above is to argue that the main topic being investigated by the tribunal – an alleged smear campaign against McCabe – is likely to be found to have no basis in fact. One lesson that clearly emerges from the tribunal’s proceedings to date is the wisdom of putting judgment on hold until the evidence is produced. But it does leave you scratching your head.

The top-billing figure in the whole whistleblowing saga, McCabe, is scheduled to give evidence on Monday and Tuesday in Dublin Castle. As matters stand, it is to be his only visit to the witness box. It will be the public’s best opportunity to get a look at the man at the centre of a controversy that has so preoccupied our political, media and justice systems over the past decade. It is a pity the tribunal is not being televised.