Maurice McCabe to give evidence in Charleton Tribunal

Tribunal investigating if there was smear campaign to discredit whistleblower 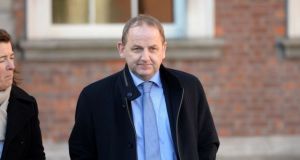 Garda whistleblower Sgt Maurice McCabe is due to give evidence in the Charleton Tribunal on Monday and Tuesday in Dublin Castle.

The tribunal is investigating how the Garda force reacted to Sgt McCabe’s whistleblowing and specifically whether the former Garda commissioner Martin Callinan planned a smear campaign to discredit him.

It is also examining whether Mr Callinan’s successor, the now retired Nóirín O’Sullivan, knew of that alleged campaign or participated in it.

Sgt McCabe made a series of claims of malpractice in the Garda, including the quashing of penalty points by certain officers.

Last year, David Taylor, a senior officer who was previously head of the Garda Press Office, made a “protected disclosure” under whistleblower protection laws, which supported and illustrated Sgt McCabe’s claims.

He says he was directed and encouraged by his superiors - including the Garda Commissioner Noirín O’Sullivan - to blacken McCabe’s name. Ms O’Sullivan firmly rejects his allegation.

Earlier this month, lawyers for the Garda commissioner told the tribunal that “a series of most unfortunate events” led to the circulation of a false rape allegation against Sgt McCabe in 2013.

The McCabe saga has contributed to the early end of the careers of a taoiseach, two Garda commissioners, a minister for justice, and two secretaries general of the Department of Justice. As recently as November last, it provoked the resignation of then tánaiste Frances Fitzgerald and came close to bringing down the Government.