Experts say 5,000-year-old monuments will not survive unless action is taken 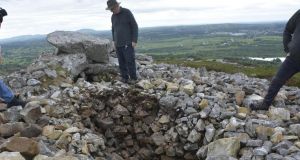 Five-thousand-year-old Neolithic tombs in Co Sligo are suffering damage and vandalism “on a scale never seen before” and will not survive unless action is taken immediately, archaeological experts have warned.

There are 75 passage tombs in Co Sligo, almost one-third of the estimated 240 in the State, according to the Sligo Neolithic Landscapes Group, which is pressing for the county’s Neolithic heritage to be deemed a World Heritage Site by Unesco.

So much material has been removed from one passage tomb, known as Teach Cailleach a’ Bheara (the House of the Witch) on the Ballygawley mountains, that an adult can now lie in the hole created.

People walking on top of some cairns are doing so much damage “that not only is there a fear that they won’t be there for future generations, they may be lost to this generation”, warned expert Dr Robert Hensey.

Saying that it would be hard to find a comparable landscape anywhere else in the world, the group warned that “a very fragile landscape” is under “grave existential threat” from tourism and development.

One of Sligo’s best-known landmarks, Queen Maebdh’s cairn on top of Knocknarea, has suffered ongoing damage including the removal of stones from the base of the monument and “walking scars” left by ever-increasing footfall, Dr Hensey adds.

The author and archaeologist, who discovered megalithic art not visible to the human eye in a Carrowkeel passage grave overlooking Lough Arrow, Co Sligo, in 2009, said many walkers instinctively climb on top of the tombs.

However, the tombs are smaller and more fragile than the Knocknarea cairn and are in danger of collapse, Dr Hensey said. A couple chose to stay in one of the tombs some years ago “with straw bedding, and their tins of beans and washing line”.

Meanwhile, Carrowkeel is also plagued by graffiti, with a significant increase in people scratching their names on to the monuments, causing potential damage to the megalithic art which has been there for 5,000 years.

While some damage is accidental, or simply carelessness, there is evidence that some people are stealing quartz to sell online: “For some, taking a piece is an instinct almost like bringing home holy water from Knock,” said Dr Hensey.

Meanwhile, there is evidence that some people may be trying to find hidden chambers or entrances to monuments at Teach Cailleach a’ Bheara under the “misguided notion” that there are valuables are to be found.

Some people believe valuable gold or bronze objects are deposited inside ancient monuments, he added: “They may not be aware that stone age sites are over 5,000 years old and predate the use of metals in Ireland. ”

Under law, it is illegal to be in possession of metal detectors at monuments and sites, or to dig or excavate for archaeological objects, an offence liable to fines of up to €65,000 or up to three months imprisonment.

“We cannot have 24-hour surveillance on all of the endangered monuments in Sligo,” said Dr Hensey, but better signage and more engagement with the public would be key to raising awareness about the vulnerability of the sites, he added.

On July 25th two group members Dr Stefan Bergh, an archaeology lecturer at NUI Galway, and Pádraig Meehan, a guide at Carrowmore, will lead guided tours to Teach Cailleach a’ Bheara and Queen Maebdh’s grave to highlight the dangers facing the tombs.

The Office of Public Works said it was aware of “visitor pressure” facing Neolithic sites and is working with other State bodies to address the issue, “particularly at those sites, including Carrowkeel, where we have a maintenance responsibility”.

The Department of Heritage confirmed that its National Monuments Service (NMS) had inspected the passage tomb in Ballygawley after it was damaged in 2019 and “unfortunately, the latest report we have received does indicate further damaging activity at the site, which is in a very remote location”. A spokesperson said: “ It is not in the care of the State and we would appeal to the public for any information that may assist in our investigations”.

The Department said it was aware of “the challenges” at Knocknarea following a dramatic rise in walkers there, and th NMS was doing a detailed recording of the site, to be used as a baseline to measure ongoing erosion . A drone survey was undertaken there last week as part of the process

The OPW was preparing a programme of works for the preservation and protection of the monument at Carrowkeel, the department said.

Dorothy Clarke, director of services with Sligo County Council said it was involved in and fully supported the bid for Unesco listing, though she pointed out that some key sites are on privately-owned land.

The council had a “balancing act” between encouraging tourists and protecting sites. “We are damned if we do, and damned if we don’t,” she said – adding that the local authority wanted local tourism to be sustainable.