Green List: Row has left some wondering if this Coalition will survive 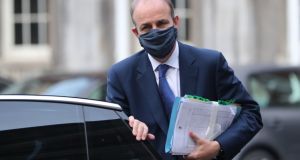 Tánaiste Leo Varadkar’s statement on Tuesday, issued hours before the Cabinet meeting to discuss the easing of travel restrictions and which appeared to criticise the “mixed messages” coming out of the Government – his own government, that is – triggered a row between the coalition partners that was not resolved until late that night and which has left political sources and senior officials wondering about the sustainability of the arrangement.

The main row was not at the Cabinet meeting itself – a lengthy affair which began at 8.45pm and concluded sometime soon after 11pm – but during talks between the party leaders and their officials at the effective clearing house that it supposed to head off disagreements before they reach a full meeting of the Government. It had its work cut out on Tuesday.

According to sources who took part or were briefed soon afterwards, the Cabinet discussion on the travel “green list” was held without rancour, but featured a variety of viewpoints on the policy issues at play, with most Ministers contributing.

Ministers were presented with a memo – which was put together after consultations between the leaders and their aides in the hours before the Cabinet meeting – at the beginning of the discussion, which they took time to read and digest. The meeting went on to agree to all points in the memo; the list of countries, more extensive than expected, and including Italy which senior officials had discounted in the days beforehand.

Sources on all sides of the Government concede that Varadkar’s intervention caught them off-guard and created a significant political problem, revealing substantial differences at the heart of government about one of its most important policy areas.

Some sources suggest that the Fine Gael leader’s comments stemmed from a growing frustration at how Government business was being managed at the centre, though it is hard to escape the conclusion that he was making things worse for the Government by speaking in public.

Differences in coalition governments happen all the time, but differences between the principals are usually kept behind closed doors.

Some of this, no doubt, is down to teething problems as the three parties settle down a try to establish a shared modus operandi.

If you talk to any Fianna Fáiler for long they start to give out about Fine Gael Ministers, insisting that they have left a mess in their wake and don’t accept Fianna Fáil is leading the Government.

But talk to Fine Gaelers and after a semi-decent interval, they will begin to give out about Fianna Fail – claiming they haven’t a clue what they’re doing and are hopelessly unprepared.

Fine Gaelers bitch about Micheál Martin (“He seems very weak”), Fianna Fáil about Varadkar (“Leo’s behaviour has been out of order”).

All this is to be expected. It was always going to take some time for the two old enemies to figure out how they were going to live with one another. But this Government might not have the luxury of taking its time with the process.

A number of official and political sources have privately expressed alarm about the lack of a strong, united and proactive centre that sets and enforces the shared agenda of the three coalition parties.

“Personal relations are very good, but there isn’t yet a coherent centre,” one Minister concedes.

Another senior official finds the stumbling at the centre of government “fascinating and disturbing”, while yet a nother source worries that “people are not talking to one another”.

The party leaders and senior Ministers, says another senior official, “need to get their s**t together.”

Faced with a potential second wave of the pandemic signalled by the recent growth in infections, the launch of a stimulus plan on Thursday, and the defining question of whether it can open schools in five weeks, the fledgling coalition is fast running out of time to ease itself into the job.

It needs to quickly start doing both politics and government rather better than it has so far, or the circumstances it faces will tear it apart.