One further death and 17 new cases confirmed in the State

Chief executive Paul Reid says the HSE is concerned at the number of people not turning up for coronavirus testing after being in contact with someone who has the disease. 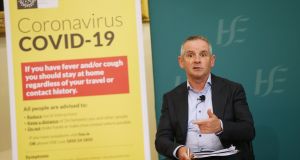 HSE chief executive Paul Reid is pictured at a media briefing at the the Royal College of Physicians on Kildare Street in Dublin on Wednesday. Photograph: Sam Boal/Photocall Ireland.

One further death of a person with Covid-19 has been reported to the Health Protection Surveillance Centre (HPSC), while there have been a further 17 confirmed cases.

There has now been a total of 1,754 Covid-19 related deaths in Ireland, while the total number of confirmed cases stands at 25,819.

“I appreciate how difficult it is for people to limit their social activities and to physically distance from friends and loved ones,” he said.

“These actions are vital to our collective effort to suppress this highly infectious disease as we work towards reopening our schools and our healthcare services, and to protect our healthcare workers who have been at the frontline of this pandemic over the past six months.”

Currently, there are 14 patients in hospital with Covid-19, with six of these in intensive care. Three people were admitted to hospital in the past 24 hours.

The total number of people hospitalised stands at 3,340 with 438 of these requiring intensive care treatment.

He said that between July 5th and 18th there were 267 confirmed cases, compared to 155 in the previous fortnight.

He said it was really important that when people were identified as close contacts of someone who has the disease, even if they did not have symptoms, come forward for testing.

“It is really important that a person may test negative in the day zero test but could test positive on the day seven test,” he told a press conference in Dublin on Wednesday. “It is important for the public to understand that one-in-10 close contact cases will most likely have positive test result when first tested.”

HSE national clinical director Dr Colm Henry said given what is now known about the scale of asymptomatic transmission of Covid-19, “people are not the best judge themselves as to whether they need to take a test”.

“That is what is called a cluster, which becomes an outbreak and eventually, if enough ripples come together, becomes uncontrolled community transmission and that is all traced back to individual responsibility and behaviour.”

He said the median age of a confirmed case was now 33 years, with about 70 per cent of cases among people aged 45 years or less.

Mr Reid said almost 55 per cent of cases were in Dublin, followed by Kildare at 10.5 per cent.

The HSE, on Wednesday, announced a new plan for a three-phased restoration of many services which were stopped or curtailed as a result of the pandemic. The HSE warned that the volume of patients treated could be reduced and waiting times could be longer.

Mr Reid said that he wanted to say very clearly that services would be very different in the future as a result of infection control requirements and social distancing.

“We know we have to operate within reduced capacity all across our system which will make things slower in how we deliver services. Services will take longer to complete,” he said.

Mr Reid said health services would have to be delivered in different ways particularly involving the use of telephone and online consultations.

He said the HSE was setting out the plan for restoring services against the backdrop of very uncertain risks regarding Covid-19 and the possibility of another surge in case numbers.

Mr Reid urged the public to “continue to stick with us”.

He added that 1.4 million had downloaded the Covid-19 tracker mobile phone application and that 91 people had so far been alerted that they were a close contact of someone who had the disease as a result.