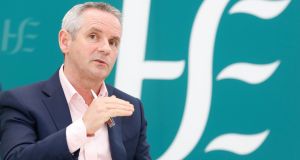 HSE chief executive Paul Reid there would be a greater emphasis on telemedicine and remote consultations in the future. Photograph: Leon Farrell/Photocall Ireland

There will be more people on waiting lists for longer periods as health services are reintroduced in the wake of the Covid-19 pandemic, the Health Service Executive (HSE) has said.

The HSE on Wednesday launched a three-phase plan for the return of health services. However, it warned that Covid restrictions would mean a smaller volume of patients could be treated.

HSE chief executive Paul Reid said there would be significant differences to services that patients would have experienced prior to Covid. There would be a greater emphasis on telemedicine and remote consultations in the future.

“The fact that it is a lower volume of activity means that we will have people waiting longer for services. We will have more people on waiting lists for longer periods as we seek to increase the volume. But we are targeting priority work,” she said.

The new HSE plan set out a schedule for the return of services over three phases – from July and August, from September to November and from December to February of next year.

The plan, for example, said it envisaged in the September to November phase elective out-patient clinics expect to reach about 75 per cent of normal capacity.

The plan said between December and February hospitals would “continue to see patients in person or via telehealth, and work to increase throughput where possible”.

It said out-patient clinics expect to operate at least 70 per cent of normal capacity in this phase.

The plan said for elective and day case in-patient services in acute hospitals , almost all had now been reinstated across specialities and sites, at reduced overall levels of activity.

“Any services or part of service still on hold or being reintroduced on a phased basis is based on clinical risk assessment.”

However, the HSE said theatre and procedure room activity could be reduced by up to 30 per cent depending on the type of procedures being undertaken and extra safety requirements, personal protective equipment (PPE) and infection control requirements, requirement for patient testing and isolation prior to procedures.

It said scope procedures were now operating at 50 per cent normal activity. It said in the second phase to November scope procedures “with mitigations in terms of testing and PPE may increase to 7 per cent activity”.

However, it also warned that winter months might see a surge in activity due to cold and flu or other respiratory conditions, and bring associated pressure on planned activity.

“Any services still being reintroduced on a phased basis will be based on clinical guidance and risk assessment”.

It said in the third phase to next February theatre and procedure room activity might remain reduced by up to 30 per cent.

The plan said cancer services, which re-commenced in July and August, would see activity increase over the three phases as would disability and older persons’ services .

The HSE plan stated: “We need to deliver services in a different way to make sure we keep everybody, patients and staff, as safe as possible as we do this. Where possible, services are working to connect with people using telehealth, providing consultations on phone or on video calls. This is challenging and is going to take some time and we will need the patience and support of our staff, our patients, their families and the public, as the health services that were paused or restricted now resume.”

The HSE said it was “seeking to make the most of the resources we have and optimise productivity through alternative work practices”.

“This includes the widespread adoption of telemedicine and the use of alternative settings, including private hospitals, community facilities and alternative outpatient settings.”

The HSE said it was in talks with private hospitals, the Department of Health and the Department of Public Expenditure about “developing a surge agreement, and also a framework for accessing capacity to meet urgent and elective care requirements”.