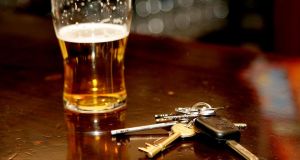 The new Bill will introduce a mandatory driving ban for a first drink-driving offence if a motorist has a blood/alcohol level of above 50 milligrams per 100 millilitres. Photograph; David Sleator

There are two key elements to the Road Traffic Bill. The first is to increase drink-driving penalties to ensure a mandatory driving ban is handed down to all those caught drink-driving.

Currently the law provides that a motorist who is detected driving with between 50 and 80 milligrams of alcohol per 100 millilitres of blood may receive penalty points and a fine for a first offence, rather than an automatic ban.

The new Bill will introduce a mandatory driving ban for a first drink-driving offence if a motorist has a blood/alcohol level of above 50 milligrams per 100 millilitres.

The origins of what has been referred to as a “get-out clause” stem from 2010, when the then Fianna Fáil minister Noel Dempsey lowered general drink-driving limits, but came under pressure form rural TDs to allow first-time offenders with low levels of alcohol to avoid an automatic ban.

Current Minister for Transport Shane Ross and a number of road safety campaigners set out to remove the “get-out clause”, pointing out that 6 per cent of drivers involved in fatal crashes between 2008 and 2012 had a blood/alcohol level of between 50 and 80 milligrams. This means that on average eight people are killed each year at this alcohol level.

The second element of the new Bill aims to strengthen penalties for car owners who allow unaccompanied learner drivers.

It is currently illegal for learner drivers to drive a vehicle unaccompanied by someone with a driving licence of at least two years’ standing. The drivers face fines and penalty points.

The Road Safety Authority has published figures showing more than 6,700 learner drivers in 2016 were given penalty points for driving unaccompanied.

The change proposed by the Bill would allow for the owner of the vehicle to face prosecution and fines of up to €2,000 while the vehicle may also be seized by gardaí.

The measures will apply to all vehicles, including private cars, agricultural vehicles and commercial vehicles. It will also allow for gardaí to seize the vehicle driven by an unaccompanied learner driver.