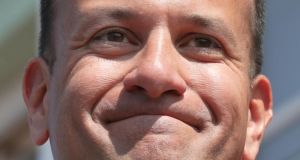 Taoiseach Leo Varadkar on Wednesday clarified his New York remarks in the Dáil and said he “strongly believed that a free press was important in a democracy”. Photograph: Laura Hutton/PA Wire

Taoiseach Leo Varadkar held court over a Caesar salad starter, a main course of halibut and an apple crumble dessert at Monday’s private lunch in New York, squeezed into his busy schedule.

It was an informal affair, although the invitation requesting the attendance of more than a dozen young Irish movers and shakers on the New York finance, media and technology scene described it as a “working lunch”. Someone suggested a cut-off age of 45, though sources suggested this was not rigorously enforced.

Ireland’s consul general in New York, Ciarán Madden, hosted the lunch at his residence at 50 UN Plaza, a 29th-floor apartment that affords stunning views of the East River and the monolithic United Nations headquarters – the reason why Varadkar was in the United States earlier this week.

A freewheeling Varadkar, on the second day of his three-day trip to launch the Irish official campaign for a seat the UN Security Council, was in good form. He was relaxed with his jacket off and shirt sleeves rolled up, and happy to take questions.

The subjects varied across different topics, reflecting the diverse mix of people invited by the New York-based diplomats, for a long lunch and discussion (it ran from 12.30pm to 2.30pm).

The exchanges became most contested, sources said, on two subjects in particular: the media and gender pay equality. (He also touched on Trump administration warnings about countries taking actions against Israel.)

The conversation took a negative turn against the media when the Taoiseach said he had sympathy for Donald Trump’s criticism of his treatment at the hands of the American press.

Challenged on his views, he appeared to question the motives of some investigative journalism, namely the Observer’s investigation into Cambridge Analytica, saying the print media often focused on technology and social media companies because they were eating into their business.

He said investigative journalists were sometimes wrong and not held to account. He referred to the work carried out by RTÉ’s Prime Time.

He joked that there were more political journalists covering Dáil Éireann than TDs. He said Irish political reporters were more interested in the story than the truth and that they were more preoccupied with whispers in corridors than the detailed workings of government.

Earlier, during a discussion on exporting Irish art and the success of RTÉ crime drama Love/Hate, he joked that more money should be diverted from current affairs programming into making more dramas.

Varadkar had a robust back-and-forth with one guest, flowing from a question about whether Ireland should follow Iceland’s lead and legislate to make pay for men and women equal. The Taoiseach and the female attendee had differing views of recalibrating pay to parity between men and women commensurate with the work involved.

However, it was Varadkar’s sympathising with Trump which stunned some people, according to sources. “This was a room full of people living in the United States, people who are seeing on television daily the president literally saying the media is the enemy of the people,” said a source familiar with the discussion.

“I don’t know if the Taoiseach didn’t quite comprehend how bad things are in the United States or if he didn’t care, but it certainly came off as the latter.”

Yesterday, Varadkar clarified his remarks in the Dáil and said he “strongly believed that a free press was important in a democracy” and that he “profoundly” regrets if anyone thinks he doesn’t respect journalism or a free press.