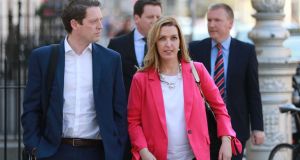 Vicky Phelan said she had to push hard to get access to Pembrolizumab. Photograph: Nick Bradshaw

One of the country’s leading oncologists is calling on the Government to fund a trial of new drug Pembrolizumab for women with cervical cancer.

Vicky Phelan announced recently that her tumours have been reduced significantly since she began taking the drug. “I had to push hard to get access to this drug, and the only way I got access to it was pestering people.

“I had fundraising money to pay for it and they still wouldn’t give it to me. So I had to keep pushing and pushing until I made a nuisance of myself to get access to it, and shame them into it in the end,” she said in an interview with The Irish Times on the day she was conferred with an honorary doctorate at the University of Limerick.

Ms Phelan settled a High Court action in April against Clinical Pathology Laboratories for €2.5 million after she learned that her cancer was missed through a chance reading of her medical file while waiting for an appointment.

She had attended CervicalCheck for a routine smear test in 2011 and wrongly received the all-clear, but was not told about it. The HSE said it knows a review was warranted in 442 cervical smear cases and more than 200 cervical smear results should have resulted in earlier intervention.

Dr Fennelly said the drug is unique in allowing patients to be tested in advance to determine their potential response, and this makes it cost effective.

“The ability to predict a response means it is a good and efficient therapy.”

The drug has been trialled in the US where the Federal Drugs Administration (FDA) has called for its immediate approval, said Dr Fennelly.

“The key thing is that options are limited for these patients. The onus is on us as physicians to make this available to our patients.”

He called on the State to fund a trial of the drug for cervical cancer patients in the short term and to do so “in a rapid manner”.

Covid-19: Mother and daughters moved into home to tend elderly