Patients using drug recalled over impurity urged not to panic

About 50,000 Irish patients likely to be affected by recall of drugs containing valsartan 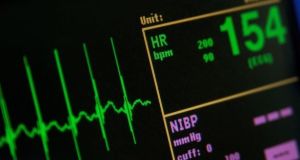 The HPRA said it was undertaking a “precautionary recall” of a number of specific medicines containing the active ingredient valsartan.

Patients using a blood pressure and heart medicine, withdrawn for precautionary reasons yesterday by the Health Products Regulatory Authority (HPRA), have been urged not to panic, by the Irish Patients’ Association (IPA).

The HPRA said on Thursday it was undertaking a “precautionary recall” of a number of specific medicines containing the active ingredient valsartan. The medicine contains impurity N-nitrosodimethylamine (NDMA) which is classified as a probable carcinogen.

The recall is understood to affect about 50,000 patients in Ireland, who are being advised not to stop taking the medicine.

Spokesman for the IPA, Stephen McMahon, said those taking the medicine should see their pharmacist or doctor. He also said the regulator should state what advice it was giving to pharmacists and doctors.

“Pharmacies particularly for prescription drugs should be able to execute a fast recall and short list the patients they have dispensed the medicines to, rather than the other way around,” Mr McMahon said.

“Has this been activated and, if not, why not?”

Mr McMahon also asked whether patients would get a refund and whether pharmacies would be refunded by the wholesaler/manufacturer for returned or unused drugs.

“For drugs to be licensed they must have met high standards, proven by clinical trials, ingredients and quality production processes,” he said.

“That being said, a hard question is why was NDMA, which is classified as a probable carcinogen, not picked up by any of the licensing authors anywhere in Europe? How long have patients been exposed to this probable carcinogenic?”

Mr McMahon said there were pressures everywhere to contain drug costs and he asked whether any other manufacturing facilities were producing the drug and if the same impurity could impact on other products.

“Such manufacturing impurity must be forensically investigated, is it a by-product of the mixing process or a defective product?” he said.

“The findings of any investigations whether in Ireland or Europe must be made public.”

Fianna Fáil spokesman on primary care and community health services, John Brassil, who is a pharmacist, also raised concerns about the recall.

“Although a memo was issued by the HPRA yesterday, the majority of pharmacists and doctors only found out about the recall via a news alert.

“No tangible or useful information has been given to GPs or pharmacists by the authorities. They are completely in the dark as to what is the best course of action. While there is no immediate risk to health, the recall is very worrying for patients – many of whom are unsure as to whether they should continue taking their medication,” he said.

He said pharmacists around the country had reported “queues of worried patients”at their pharmacies wondering whether their medicines are safe to take.

“Pharmacists have alternative blood pressure medicines but, unlike in some other jurisdictions, they do not have the authorisation to prescribe the alternative. That requires a GP visit. GPs have not been issued with guidelines as to what to do, and this recall affects up to 60,000 patients which is putting a further strain on the GP system that is already at capacity.

He said the HSE and the HPRA have been “of little help” to pharmacists or to GPs.

European medicines regulators were expected to hold a “rapid alert” meeting on Friday afternoon to discuss the precautionary withdrawal.

It is understood the EU regulators will initially be considering the issue of stock control, to ensure there are adequate supplies of unaffected products in pharmacies throughout the union.

The HPRA has said that in addition to working closely with the European regulatory network on the investigation, it was informing all stakeholders including the Department of Health, the Pharmaceutical Society of Ireland, the Irish College of General Practitioners and others of the regulatory action.

It said it would provide further updates as more information became available. A list of the affected products is available online at hpra.ie/valsartan.