Taoiseach is ‘prickly’ and has ‘authoritarian streak’ – Martin 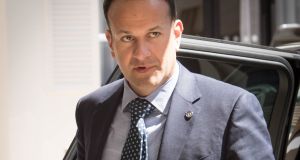 Leo Varadkar: “I don’t think I have said one personalised negative thing about Micheál Martin or made a personalised remark about him.” Photograph: Stefan Rousseau/PA Wire

Tensions between Fine Gael and Fianna Fáil have continued to escalate after Micheál Martin described Taoiseach Leo Varadkar as a “prickly” man “with an authoritarian streak”.

The Fianna Fáil leader was responding to comments made by Mr Varadkar at a private lunch in New York where he said he sympathised with president of the United States Donald Trump’s view of the media.

On Thursday Mr Varadkar sought to clarify the remarks, stating he expressed sympathy with the president “for taking on his critics in the media”.

In a personal attack on the Taoiseach, Mr Martin told reporters in Limerick that Mr Varadkar was relentless in leaking information to journalists in Leinster House.

The Fine Gael leader “fed off the Irish media” and had now “turned on them”, accusing them of being gossips, Mr Martin added.

“He does have a prickly nature, and he does have an authoritarian streak, where he doesn’t like criticism; he’s very sensitive to it.”

Mr Varadkar told a private lunch gathering in New York on Tuesday that he sympathised with Mr Trump’s view of the media, saying the media was not interested in the truth but in the story.

He claimed political journalists were more interested in gossip at Dáil Éireann than in the workings of Government, describing their interest as being in whispers in the corridors of Leinster House.

He also claimed some investigative journalism in Ireland was incorrect, referencing RTÉ in particular.

On Thursday, Mr Varadkar denied launching an attack on the press and insisted he had made positive comments about the media that were never reported.

He said he had high regard for the media and had never made any personal criticism about any individual. He said he did not feel he had been the target of unfair or bad press.

“I regret if anything I said came across as me being unsupportive of the media,” Mr Varadkar added.

However, he declined to be drawn on Mr Martin’s comments, insisting he would not “ get involved in tit-for-tat personalised comments”.

“I don’t think I have said one personalised negative thing about Micheál Martin or made a personalised remark about him.

“Look, it is a free country and he is entitled to free speech and if he wants to make personalised attacks on me, that is fine. I am not going to be engaging in tit for tat.”