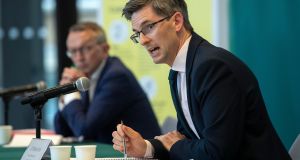 Public health experts warned the Government that the scale of the Covid-19 outbreaks in the midlands threatened to spread “much more widely” in the region over the coming days and weeks.

In a letter to Minister for Health Stephen Donnelly on Friday setting out the reasons for recommending the introduction of new measures, acting chief medical officer Dr Ronan Glynn said a tightening of restrictions in Kildare, Laois and Offaly was “proportionate” and “necessary now” to curb the surge in transmissions.

The same measures “could apply to any other region in the future”, added Dr Glynn, who is also chair of National Public Health Emergency Team (NPHET).

In the letter, which informed the Cabinet’s decision to reimpose tough restrictions on the three counties and which has been seen by The Irish Times, Dr Glynn said there has been a change in the progression of the disease since late June.

NPHET has been watching the shifting trends “with growing concern” culminating most recently in a sharp rise in infections over the last week.

Cases had more than doubled over the period with “several significant and large clusters” in counties Kildare, Laois and Offaly, Dr Glynn said in the letter.

To illustrate the gravity of the midlands surge, he noted the epidemiological incidence - the number of confirmed cases per population - for coronavirus in Ireland over the last 14 days was 9.6 per 100,000 people.

There have been 150 new confirmed infections in Kildare over the past two weeks; 55 in Laois; and 36 in Offaly.

Dr Glynn pointed out a high proportion of the confirmed cases are among those aged under 45 years. In Kildare, 75 per cent of cases are under 45 years; in Laois it is 93 per cent; and in Offaly the figure is 65 per cent.

Until now, hospitalisations, critical care admissions, nursing home cases and deaths were not showing any worrying trends in the three counties, but because of the age profile of cases, NPHET is worried there could be a “delay” in the spread to older and more vulnerable sections of the population in the midlands.

The vast majority of cases in the region were transmitted through close contact with a confirmed case: Kildare 94 per cent; Laois 91 per cent; and Offaly 71 per cent.

There were currently “few cases” as a result of community transmission, Dr Glynn noted.

Nonetheless, there are “significant concerns” in NPHET as all the relevant indicators were showing a “significant and increasing level of disease” in the three counties.

Given the scale of outbreaks there is a “real risk that this could spread much more widely in the community in the coming days and weeks”, Dr Glynn told Mr Donnelly.

Advising on a tightening of restrictions for two weeks, he said the situation could be “reviewed” at that stage.