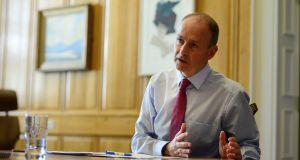 Taoiseach Micheál Martin: ‘We’re still the largest party in the Dáil which gets forgotten. And our people need to realise that.’ Photograph: Bryan O’Brien/The Irish Times

Taoiseach Micheál Martin has said the substantial impact Covid-19 will have on the two key sectors of health and housing over the next year will present “huge challenges and worries” for the Government.

In a stark assessment of the strain the pandemic will impose on health services the Taoiseach said waiting times and vital diagnostic services will be affected detrimentally with a serious knock-on affect for many other important areas.

“The resumption of non-Covid medicine will be impacted significantly in terms of waiting times and diagnostics,” he said.

“That’s a worry in terms of the early diagnosis of cancer, for heart disease and a range of other conditions people develop ordinarily in life, and would have been ordinarily detected . . . So these are huge challenges and worries for us. And that’s an ongoing impact of Covid,” he added.

In an interview with The Irish Times Mr Martin also said that the continuing presence of Covid-19 would have an adverse impact on the Government’s ambitious plans for delivery of new housing, including affordable and social units.

He said “without question housing construction figures are going to be impaired by Covid-19” because of social-distancing rules and of the shut down during the summer.

That could result in the Coalition not reaching the targets for housing it has set out in the Programme for Government.

Mr Martin said the combination of the July stimulus, the Government’s capacity to borrow, as well as unified action by the EU to the pandemic, ensured that the economy was on a solid footing well into 2021.

However, in the shorter term he said the projected €30 billion deficit might have to be increased in 2020 in a situation where the health services were dealing simultaneously with the flu season and a continuing Covid-19 outbreak.

“That will create particular specific challenges to the acute hospital system and the primary-care setting in particular. So, this is going to be very very challenging and protecting our people is the number one,” he said.

Separately, in Department of Health documents officials have raised fears that almost 5,000 fewer hospital beds will be available because of the impact of the pandemic. The papers indicate that “there could be a shortfall in capacity, due to safe distancing requirements and reducing utilisation to 80 per cent, of 4,700 beds based on a current baseline of 11,000 beds”.

There is an objective of operating generally at 80 per cent capacity to run “safe levels of activity and comply with infection control measures”.

Mr Martin also said his first month as Taoiseach had been frenetic but he had not been “fazed” by any of the events or controversies. He said he would have preferred not to sack former minister for agriculture Barry Cowen, but felt he had no alternative. He said he understood the anger of Fianna Fáil TDs who were not promoted to Government.

Mr Martin added that despite setbacks the Government had achieved a lot in its first month including the July stimulus, return-to-school plan, resumption of North-South ministerial meetings and 11 pieces of legislation.

On his personal situation, the Taoiseach said he believed the Government will serve its full term, that he will become tánaiste when the top roles are swapped in December 2022 and that he will lead Fianna Fáil into the next election.

He has also rejected any suggestion his party is in demise following a poor general election.

“I had all of this in 2011, the party would never recover, the party was going to be finished,” he said.

“We’re still the largest party in the Dáil which gets forgotten. And our people need to realise that . . . We did suffer a setback in the election so we want to do much better. I acknowledge that there are lessons to be learned from that . . . But I take strength from the fact that we have a very good quality cadre of people in the parliamentary party. And the newly elected people, you know they have a stake in the party for the future.”