Q&A: Here's how to have a good night out in a restaurant under the latest restrictions 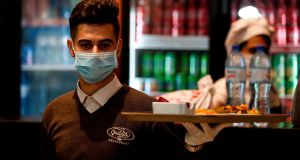 Restaurant owners in Ireland have been able to reopen since June 29th, so what are they complaining about now?

From Monday, under new Covid-19 regulations, all restaurants and pubs that serve food will be required to close at 11pm. The Restaurants Association of Ireland (RAI) described the decision as “bizarre and out of the blue”, and says it puts tens of thousands of jobs at risk.

Ah, 11pm is not so bad. We’ll just order another bottle of wine and take our time over it.

That’s not how it works. Tánaiste Leo Varadkar confirmed that “customers should be off the premises by 11pm”. This means last orders to the kitchen by 9.15pm if diners are to spend their allotted 105 minutes at the table before the 11pm deadline.

Can’t I stay as long as I want if I’m ordering food and drink?

The guidelines for reopening restaurants, cafes and pubs that serve food, issued by Fáilte Ireland, stipulate that “physical distancing of 2 metres should be maintained. However, if this is not possible, this can be reduced to 1m in controlled environments,” as long as certain precautions are taken. These include making pre-booked time slots available, with a maximum of 105 minutes allowed at tables, followed by 15 minutes for staff to sanitise the area before the next guests are seated. Anecdotally, though, restaurants that are not busy have been slow to move diners on.

Do I have to have a reservation, or can I just walk in and eat?

The reopening guidelines ask restaurants to “encourage bookings rather than walk-ins”. However in practice, if there is a table free, the chances are you’ll get it. The restaurant is obliged to take the contact details of one person in the party dining, and to retain them for one month, for contact-tracing purposes.

Does the time limit apply to all restaurants and gastrobars?

No, the guidelines state that “pre-booking and time-limited slots of 105 minutes duration are not a requirement if physical distancing of 2 metres is strictly maintained”. What this means is that (mostly upmarket) restaurants with adequate space can operate outside of that particular rule. But they will have to comply with the 11pm closure.

But my favourite restaurant is tiny. What do the regulations mean for them?

Operating under the guidelines means maintaining a space of no less than 1m between tables, and also between seated customers that are not from the same household (note: household, not friend group). For most restaurateurs this has meant dramatically reducing the number of seats in use, and extending opening hours to maximise potential revenue.

Is that why my neighbourhood joint is now taking orders way later than it used to?

Yes. Keeping the kitchen open late to accommodate second or even third sittings has been a lifeline to restaurateurs faced with restrictions on their floorplan. The 11pm closure order will now prevent this.

But aren’t restaurateurs saying business is bad anyway? So why would they need late opening for extra sittings?

Yes and no. Restaurants in city centres, particularly in Dublin, are being hit hard, with no corporate business and no tourists. In addition, suburban dwellers have been reluctant to make the trip into town for a 105-minute restaurant slot, with nowhere open for a drink before or after dinner. In the suburbs and tourist areas, however, there are reports that business is picking up, and neighbourhood restaurants are doing well.

But some pubs are open. What’s the story there?

Pubs that serve food are allowed to open, as long as they follow the Fáilte Ireland guidelines, which include selling a “substantial meal”, “for which it would be reasonable to charge not less than €9”, to anyone ordering alcoholic beverages. Chicken wings and toasties seem to be the “substantial meal” of choice for many.

Sounds like a lot of rules to follow, what happens if restaurant owners refuse to comply with the guidelines?

“Non-compliance can result in closure of a business”, according to Fáilte Ireland’s operational guidelines, which were drawn up in conjunction with the Health Service Executive, Health Protection Surveillance Centre, and the Food Safety Authority of Ireland. The Health and Safety Authority is the compliance body and has the power to act where businesses are found not to be following the Return to Work Safely Protocol.