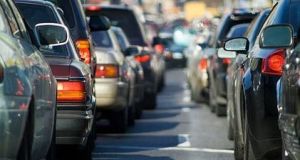 The Department of Transport has commissioned consultants to consider measures to address the impact of growing traffic levels in Dublin, Cork, Limerick, Galway and Waterford. Photograph: Getty Images

Urban congestion charges may be on the cards, along with the lowering of speed limits on motorways, according to papers which were exchanged between Fianna Fáil, Fine Gael and the Green Party during government formation talks.

Documents obtained by The Irish Times also reveal that the parties were told that introducing a frequent-flyer levy would be “complex and challenging to administer”, and would create issues with price transparency.

The parties were told in briefing materials that as the Irish population is projected to grow and “as Ireland begins its economic recovery, it is expected that our transport networks will be required to host significant numbers of additional journeys”.

“Over time this rising travel demand, coupled with a scarcity of space to expand road supply, will exacerbate the issues that we see in our cities today, and will likely require that demand-management measures be considered, including the potential role of urban congestion charging and parking policies, among others.”

The Department of Transport has commissioned consultants Systra to consider measures to address the impacts of growing traffic levels in Dublin, Cork, Limerick, Galway and Waterford.

“It is examining international best practice and building a profile of each city, including vehicle surveys. The culmination of this work will be a final report recommending measures that should be most effective for each city, outlining the impacts of introducing these measures, and identifying implementation roadmaps.”

The three parties were told that the findings of the study would be revealed in September.

The Green Party queried the impact of reducing motorway speeds on the environment, and was told that there could be an reduction of 8 per cent in vehicle emissions on motorways if speed limits were hypothetically lowered from 120km/h to 110km/h.

“All of this suggests that lowering average speed on the motorways, either through more effective enforcement or lowering the speed limit, would lower Ireland’s carbon emissions,” the notes state.

The parties were told by the department that the environmental benefits of such a move would have to be “set against the erosion of the economic benefit derived from motorway investment to improve connectivity, longer travel times… and the possibility of motorway traffic diverting on to secondary networks”.

The parties also discussed the feasibility of a frequent-flyer levy – at the instigation of the Green Party – but were warned by officials that such a scheme would be difficult to operate.

“A mechanism would be required to capture the number of flights being taken by an individual. The mechanism would need to be robust in terms of tracking an individual’s movements out of the State. It may require airlines to establish a database of frequent flyers and transfer such personal information to Revenue or whoever administers the scheme.

“Consideration would have to be given as to number of flights versus distance e.g. two trips per year to a distant destination as against regular cross-channel travel.”

Negotiators in the programme for government talks were told that there was “potential to introduce a tiered system with different sets of criteria for different travel purposes, e.g. holidays, business, visiting friends and relatives, others including stags, funerals, weddings, etc”.

A frequent-flyer levy would also present a “price transparency” issue.

“Under EU air service regulations, all passengers must have full transparency of the total price they will be charged at the time of booking – the total price is typically comprised of basic air fare, bag charges, priority boarding fees etc.

“However, at the time of booking airlines may not have visibility of the number of flights previously taken by each passenger, so they may not be in a position to include the frequent-flyer levy in the overall price. This added complexity means that all airlines would have to link into a central air travel database.”