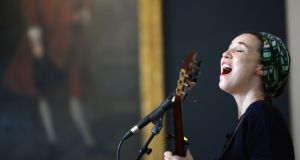 Ireland and Germany will bridge the pandemic gulf with culture on Friday evening, with a unique concert linking the edge of Europe with its centre.

The creative team behind Dingle’s “Other Voices” series have joined forces with Haldern Pop, one of Germany’s biggest summer festivals, using technology to fill in the gap left by Covid-19 restrictions on live music and travel.

The Haldern side offers alternative folk three-piece All the Luck in the World, classical jazz poet Loney Dear and Black Country, New Road whose repertoire runs from experimental rock to Mariah Carey covers.

A cornerstone of the evening will a renewed collaboration between Lisa Hannigan and European instrumental collective stargaze. They performed a year ago in Berlin in a special Other Voices concert during President Michael D Higgins’s state visit to Germany.

Friday’s German-Irish concert builds on that evening and was inspired by the recent “Other Voices Courage” lockdown concert series now seen by over 2.5 million people.

Friday’s concert opens with the first movement of Beethoven’s fifth symphony, a nod to the German composer on his 250th birthday, followed by what Other Voices founder Philip King says will be a cocktail of traditional Irish and European art music.

Amid the gloom of recent months in Ireland, King sees shifting perceptions moving culture – in particular closer cultural ties with Germany – from the realms of luxury to necessity.

“We saw a real desire for people to engage with something that was emotionally uplifting, it gave them strength and tools to deal with the enormity of where we find ourselves,” he said. “Now is the time to be looking out, not in.”

One such outward-looking collaboration was the dance piece “MÁM”, created by choreographer Keegan with music by stargaze during a three-month stay in Dingle. It toured the world and stargaze founder André de Ridder says the “MÁM” company just made it back from touring New Zealand before lockdown.

As Ireland and Germany slowly emerge from tight Covid-19 restrictions, de Ridder says he is delighted at this new co-operations, supported by Allianz and the Irish and German embassies in Berlin and Dublin.

“What we as artists need now more than ever is residences, where you don’t just perform but get to know an area and develop work artistically in that way,” said de Ridder. “A cultural and musical land like Ireland can inspire us and a stronger cultural relationship can create a new closeness at political level.”

A technical and musical highlight of Friday’s concert will be a joint rendition of “As I Roved Out”, with musicians in Ireland performing a new arrangement – hopefully in sync – with stargaze, 1,500km away in Germany.

Peter Broderick, an Oregon-born musician just relocated back to Ireland, says that, like most artists, Friday’s concert in Dingle is his first performance in months.

“We just have to pray to the internet Gods that nothing disastrous happens,” he said, “But I have a good feeling about it.”

Out of the wasteland: the first World War and modernism
7

John Malkovich: ‘I don’t think anybody enjoys their family dying. I liked all mine’
9