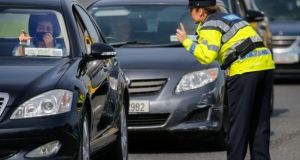 Gardaí have said they will have a ‘visible presence’ in counties Kildare, Laois and Offaly from today. File photograph: Crispin Rodwell/The Irish Times

Checkpoints have been introduced in Kildare, Laois and Offaly as gardai seek to ensure compliance with movement restrictions imposed on residents in a bid ti curb a sharp increase in Covid-10 cases in these counties.

In a statement An Garda said there will be a highly visibile policing operation with checkpoints and a permanent presence on relevant motorways and associated off ramps.

It said existing Garda resources in these counties will be supplemented by Garda personnel from the nine surrounding counties.

Deputy Commissioner, Policing and Security, John Twomey said the “operation is designed to support the restrictions that are being implemented locally in these three counties in an effort to stop the spread of Covid-19.”

Gardaí would encourage motorists to remain within their own county but the statement added there is no enforcement element”. *

The new public health measures came into force at midnight and are due to last for at least two weeks.

The new rules include restricting movement; restaurants and pubs serving food to close, apart from takeaway services, deliveries and limited outdoor dining; and the closure of indoor entertainment and sport venues such as cinemas, theatres, museums, galleries and bingo halls.

Visits to prisons, acute hospitals and nursing homes will be suspended except on compassionate grounds.

However, Acting Chief Medical Officer Ronan Glynn has warned there is no guarantee the restrictions will be lifted after a fortnight.

The National Public Health Emergency Team also warned the Government that this local lockdown could be extended to other areas.

“Households in these counties are asked to restrict visitors to their homes to no more than six people from no more than three households,” Taoiseach Micheál Martin said.

Dr Glynn said the purpose of the recommendations was to make them before there was significant community transmission.

In a letter to Government, Dr Glynn said the NPHET “emphasised that the measures being put in place today could apply to any other region in the future”.

He said while admissions to hospitals and critical care, as well as levels of deaths, are not currently showing worrying trends there may be a delay before changes to these indicators become apparent.

Under the measures, residents of Kildare, Laois and Offaly can now only travel within their own county except for work, medical appointments or vital family reasons.

Restaurants and cafes have been ordered to close their indoor areas, while hotels cannot accommodate tourists except for guests already present.

The restrictions mean all indoor gatherings must now be restricted to a maximum of 6 people from no more than three households .

Outdoor gatherings will be limited to 15 people.

Most visits to residential facilities and prisons will not be allowed while over 70s have been told to stay at home as much as possible.

All cinemas, theatres, betting shops, gyms, leisure centres, will have to close in the three counties.

There will be no sporting events or matches.

However, creches and hairdressers may remain open.

An attendance limit of 25 people outdoors is set for a funerals or six people indoors.

Regulations to allow the Garda to enforce the new measures are due to be drawn up by the Department of Health over the weekend with checkpoints expected in the three counties.

“We can’t afford to wait and see, the disease is not waiting,” he said.

Over the past 14 days, 289 cases of Covid-19 have emerged in these three counties representing almost half of all cases detected in the State during that time.

Most of the cases are linked to food-processing plants in the region, with two factories having over 80 cases.

Minister for Health Stephen Donnelly said there cannot be situations where those working in meat factories are afraid to take sick pay and they must feel secure enough to get a test.

NPHET confirmed yesterday that another four people with coronavirus in the State had died and there were and 98 new confirmed cases of Covid-19.

This is the highest one-day rise in new confirmed cases since May 22nd.

Meanwhile the Department of Education released new guidance for schools, yesterday meaning secondary students and primary and post-primary teachers will be required to wear face coverings in class when a physical distance of 2m cannot be maintained.

* An earlier version of this article stated gardaí did have enforcement powers when it came to policing the movement of people under the regulations signed into force by the Minister for Health on Saturday.