Surveillance and enforcement must improve, but another lockdown is no answer 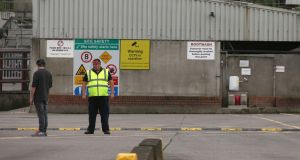 Kildare Chilling Company meat plant near Kildare town, where there has been a significant outbreak of Covid-19 among employees. Photograph: Laura Hutton

There is more than a touch of groundhog day about the news of serious outbreaks of Covid-19 in a number of food processing plants in the midlands.

Clusters of the disease in these fertile environments for transmitting the virus were a feature of the crisis phase of our pandemic, several months ago.

It seemed the problem had been dealt with, but now this. Have we learned anything?

It is disquieting, too, given the mass of existing international evidence pointing to meat factories as one of the most dangerous places for the spread of the disease. Back in June, for example, more than 1,500 workers at Tönnies, Germany’s biggest pig slaughterer, tested positive.

Have we not learned from the experience of other countries? Is this similar to our failure to pick up on the danger signs coming from nursing homes in other countries last February, a lack of alertness that had such a disastrous outcome?

While Ireland is experiencing a surge in clusters in meat factories, the German plant has reopened after its owners installed new ventilation systems, implemented weekly testing of staff and put an end to risky employment practices such as the subcontracting of labour.

Would we be experiencing these outbreaks if similar changes had been made pre-emptively across the sector here? It’s difficult to be certain, but it’s hard not to suspect that Ireland’s softly-softly approach to surveillance and enforcement is contributing to the problem.

Almost six months since we started grappling with the pandemic, we know we have done some things well; the lockdown stopped the virus in its tracks and the health service geared up effectively to deal with the surge in cases.

We didn’t manage to protect the vulnerable and so possibly hundreds of older people in nursing home died unnecessarily, and horribly. We weren’t alone there in international terms, but that’s hardly a comfort to grieving families.

Being just outside the top 10 globally for Covid-19 deaths relative to population is nothing to boast about, but at least we eventually got a firm grip of the pandemic and new cases fell to a trickle for several months.

That has given us time to catch our breath, to work out what works in fighting the virus and to prepare for what is to come as society opens up and winter approaches.

That cases are rising again is no surprise to public health officials, who are better informed and better armed to deal with this threat than they were six months ago.

It may be simpler in infection control terms to impose blanket restrictions but it is economically ruinous. No amount of money-printing and subventions can hide the zombification of much of the economy. A new approach is needed.

It may be that public health officials don’t trust people to continue to comply as much as they have up to now. Or it may be because they don’t have the teeth to enforce specific rules. Either way, we’re relying too heavily on the sledgehammer when the chisel is needed.

Throughout the summer, circular arguments about travel restrictions and green lists have dominated debate, while the elephants in the room, the Common Travel Area with the UK and the ease with which travellers can come from the US, have been ignored.

The US and the UK are two of our closest partners and they have both had a terrible pandemic. Their potential contribution to the importation of cases is greater than most other countries. Yet citizens of both countries are free to wander into the Republic, without even having to self-isolate if they cross from Northern Ireland.

Ironically, travel has played no major role in the resurgence of Covid-19, with home-grown cases mostly responsible.

Testing and contact tracing are the key weapons in tackling fresh surges of the virus. We don’t know whether our current 15,000-a-day capacity is sufficient because by the time it was built up, the number of new cases had fallen away.

It’s now said to be a next-day service for the delivery of results after the test is carried out, but there are still anecdotal reports of longer waits.

The average time to complete all calls when tracing contacts of a case is 1.2 days. Yet up to a quarter of contacts fail to show for a free test on “day zero” and up to half don’t show for a further test seven days later. The words “leaky sieve” come to mind.

A new approach to testing might see more pooled testing, where samples from an entire neighbourhood, or factory, or school, are collected. If the pooled sample is clear, good; if it isn’t, the virus is present and individual testing is required.

Many rapid tests have been developed and could have a role, in spite of doubts about their reliability. Anyone testing positive on a one-hour test, for example, could be sent forward for the more comprehensive PCR test, while self-isolating.

Despite the precariousness of the current situation, there is no going back to the full lockdown of last March. We know now what works to stop the virus: distance, hand hygiene, masks. We know where the risky environments are: crowded indoor spaces, meat plants, shared accommodation.

We need now to continue to protect the vulnerable, and to develop targeted strategies that “build a wall” around the current outbreaks.

However, there is as yet no reason not to keep moving towards the restoration of a low-risk society where people can try to restore their economic fortunes while staying healthy.