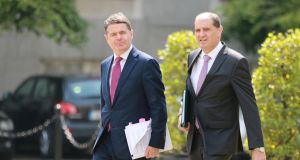 Paul Kehoe (right), the former minister with responsibility for defence, said last month that some initial preliminary work had commenced on the review of pay structures. Photograph: Nick Bradshaw /The Irish Times

A year after a government plan to tackle recruitment and retention problems in the Defence Forces was published, military officers have said the initiative “has been allowed to fail”.

The Representative Association for Commissioned Officers (RACO) said there were about 300 fewer personnel in the Defence Forces than there were when the plan was put in place 12 months ago.

The organisation said the high-level plan was failing long before anyone had heard of Covid-19, and that it was cynical to blame the pandemic for delays in implementation.

It said personnel in the programme management office had been reassigned and this effectively meant winding down implementation of the plan.

The then government last year put in place a €10 million package of allowances arising from a report of the Public Service Pay Commission. There were also a series of other pay and non-pay measures in the plan.

On Sunday, the organisation said: “The high-level implementation plan, Strengthening our Defence Forces, is failing to meet its agreed timelines in over half of its assigned projects.

“This would be wholly unacceptable at any juncture but to consider that it is occurring at a time when the Defence Forces have been responding quickly and effectively to an unfolding public health emergency, in spite of the retention crisis, is unconscionable.

“We are now a full year into the implementation of the plan, and at this point, with Defence Forces’ strength having fallen to just over 8,400, the plan has been allowed to fail, and members feel betrayed yet again by those charged with their welfare.”

The establishment strength of the Defence Forces is 9,500 personnel.

The organisation said one of the key elements of the plan was to have been a review of pay structures with an expected aim of “putting more money in the pockets of permanent Defence Force members”.

Paul Keogh, the former minister with responsibility for defence, said last month that some initial preliminary work had commenced on this project but that the “ main body of work will be done as part of a wider review of public sector pay arrangements”.

“The Covid-19 emergency has impacted project time frames for the remaining non-pay related projects. For some projects resources were necessarily reassigned to matters relating to the Covid-19 response and where other essential work necessarily took priority,” Mr Keogh said.

The organisation said the time frame for this wider pay review had not been confirmed.

Revenue dog sniffs out cannabis labelled as Star Wars Lego 18:21
Government has ‘no current plans’ to follow Spanish outdoor smoking ban 18:20
Coronavirus: 67 additional cases but no new deaths reported in the State 18:10
‘Overwhelming’ support for closing streets around Grafton Street to traffic 18:05
Children in Dublin who use public transport should walk or cycle, education dept advises 17:15