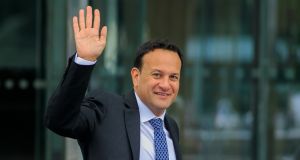 The Irish Congress of Trade Unions in a letter to Minister for Enterprise and Employment Leo Varadkar said the Government should appeal the ruling of the High Court. Photograph: Gareth Chaney/Collins

The recent High Court ruling striking down parts of industrial relations legislation may have “grave implications” for the pay, terms and conditions of construction workers in particular, the trade union movement has told the Tánaiste and Minister for Enterprise and Employment Leo Varadkar.

The High Court last month found parts of the legislation allowing for the making of sectoral employment order covering minimum terms and conditions were unconstitutional.

The Irish Congress of Trade Unions (Ictu) in a letter to Mr Varadkar said the Government should appeal this ruling of the High Court.

The general secretary of Ictu, Patricia King, said in the letter: “We are also strongly of the view that primary legislation can be enacted to address the deficiencies identified by the High Court. There is nothing in this judgment to prevent the Oireachtas enacting primary legislation in the same terms as the sectoral employment order previously in force.”

Some contractors had warned that abiding by provisions in sectoral employment orders in the electrical sector would have forced them to lay off staff.

“We believe that there are strong and compelling reasons why it should do so. If this judgment stands, it will impact on the legislative process over a wide field and not just in relation to employment,” Ms King said.

“As you know, normally, the initiation of an appeal automatically acts as a stay on the decision under appeal. However, that does not apply in the case of a declaration of unconstitutionality.”