Will all pupils return to school in September? 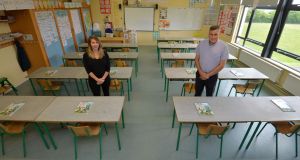 When public health guidelines for the safe reopening of schools were published this week, they worried Matt Melvin, principal of St Etchen’s National School in Kinnegad, Co Westmeath.

The guidelines state that a one-metre distance is required between pupils, with the exception of junior infants to second class.

“We’d measured the classroom before and realised it wouldn’t be possible to fit all the children in class,” he says. “Some of our classes have 30 pupils. They wouldn’t fit and they share desks.”

However, a closer reading of the guidelines states that the one-metre rule should apply for pods of pupils in classes “where possible”. The caveat is seen as crucial by school leaders.

“That will give us much more flexibility. We wouldn’t be able to get everyone back if the one-metre rule is strictly enforced.

“If you have a can-do attitude, I think it should be possible to get all the children back,” Melvin says.

School managers, teachers’ unions and parents have been digesting the guidance produced by the health authorities.

There is a general sense that at primary level most schools should be able to accommodate the majority of pupils – though it will not be without challenges.

“No matter what way the maths is done, it will be very difficult to fit 35 or 36 children into an 80sq m room, not to mention some of the smaller, older classrooms,” he says.

At second level there are also concerns. Here, there is no such ambiguity in the guidelines, which state that there should be at least one metre, and ideally two, between students.

While classes are generally smaller at second level, many schools say their students and teachers are forced to operate in cramped settings which give little leeway for physical distancing.

Association of Secondary Teachers of Ireland (ASTI) general secretary Kieran Christie warned that many schools would not be back full-time – based on the guidelines issued last Wednesday – but may resume on a “restricted” basis.

Teachers’ Union of Ireland (TUI) general secretary John MacGabhann emphasised that schools should only reopen in a manner that guaranteed safety “for children, students in the case of second-level schools, for parents, the broader community and, I say without apology, for our members”.

The newly appointed Minister for Education Norma Foley has said the guidelines provide a platform for the “optimum” reopening of schools, but has declined to say definitively whether all pupils will be able to return.

In addition to physical distancing, there is an acknowledgement that school life will change significantly under the new guidelines.

In normal times, the schoolyard of St Etchen’s is a maelstrom of activity in the mornings.

Five hundred-plus pupils bounce around the schoolyard before teachers line them up and bring them into their classrooms at 9.15am.

Under the new guidelines, this will all stop next September.

Children will arrive at staggered times in the morning and head straight for class.

Parents who drive children to school will be encouraged to stay in their cars to avoid groups gathering at the school gates.

Pick-up times will be staggered to minimise numbers outside the school at any one time.

“There’s normally great excitement and optimism in the yard in the morning,” says Melvin.

“There’s lots of hustle and bustle. Parents meet up and shoot the breeze...it will be a shame to lose that, but the changes are very doable.”

A major concern for school leaders is whether additional staff will be available to ensure schools can continue to function.

The number of staff on sick days is expected to rise significantly given that staff with any symptoms of Covid-19 – such as a fever or dry cough – are being advised not to attend school.

Groups such as the INTO and the Catholic Primary School Management Association have questioned how schools will remain open if the Department of Education does not provide for substitute teachers.

“We won’t be able to function unless we have some flexibility on staffing,” says Melvin.

“During Covid-19 they threw money at hospitals – quite rightly – and they performed excellently. Our schools will do the same if we fund them. But if we don’t, it will be chaotic. We can’t divide classes among others if a teacher is sick. It’s too risky. At the moment, it’s like decision-makers are pretending that this won’t happen.”