US can learn from Garda reform, says policing commission chief

Ireland ‘ahead of most US jurisdictions’ in accountability, says Kathleen O’Toole 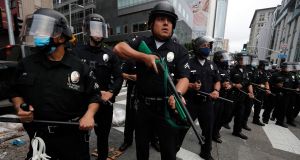 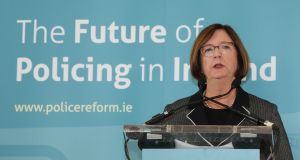 Commission on the Future of Policing chairperson Kathleen O’Toole said that in the Republic police had “never lost sight of the importance of community involvement”. Photograph: Maxwell’s

The United States should use the reform process An Garda Síochána has undergone as a template for rebuilding its police forces in the wake of the impact of the Black Lives Matter movement, according to former police chief and head of the Irish Commission on the Future of Policing (CFP), Kathleen O’Toole.

Ms O’Toole has led reform of the Garda since 2006, first in her role as chief inspector of the Garda Inspectorate and then as chairwoman of the CFP which in 2018 recommended the greatest reorganisation of the force since its foundation nearly a century ago.

The Massachusetts native has also served as chief of police in Seattle and Boston. She is currently advising on police reform in several US cities and states, including on behalf of the Department of Justice, in the wake of the Black Lives Matter movement and the associated crisis in American policing.

One of the states she is advising is Minnesota, where George Floyd died in May after a white police officer, Derek Chauvin, knelt on his neck for almost nine minutes, triggering nationwide protests.

“We’ve been struggling to get back to good, strong democratic policing principles in this country,” Ms O’Toole said of the US. “I think we’ve really veered off course for several decades.”

Ms O’Toole said one of the key lessons US police forces could learn from the Garda is “community involvement”.

“In the Republic of Ireland police never lost sight of the importance of community involvement. Even during difficult times, they’ve maintained good, strong links to the community.”

One of the main findings of the CFP’s report was that the Garda’s greatest strength was in community policing and that it should refocus efforts in that area.

“Unfortunately, I think here in the States, we lost sight of the importance of that quite some time ago. Early in my career we were trained to go out and fight the war on crime. And it was really the police versus the community, as opposed to police working with the community,” Ms O’Toole said.

Though the problems in American policing relating to use of force and targeting of minorities differ significantly from those in Ireland, the principles of reform are the same, she said.

“Accountability is a huge piece of the puzzle,” said Ms O’Toole, who was also a member of the Patten commission in Northern Ireland which established the PSNI following the Belfast Agreement.

“In Northern Ireland first and then later in the Republic of Ireland, accountability structures were created through the Policing Authority and ombudsman and the independent inspectorate,” she said. “Definitely Ireland is ahead of most US jurisdictions in that respect.”

Ms O’Toole said one of the main challenges in reforming US police practices is the sheer number of police departments, currently standing at about 18,000.

“And while a lot of some of them have worked really hard to modernise and reform, I’d say the vast majority have not because there hasn’t been that sense of urgency.

“So my hope is that this current crisis will create that sense of urgency for agencies across the country.” She said it was crucial reform came from the “bottom up rather than from the top down” and that it “reflects the specific needs of communities”.

Ms O’Toole added she was “really pleased” with the Garda’s response to the coronavirus pandemic, particularly its focus on helping vulnerable members of the community. “That’s really what democratic policing is all about.”