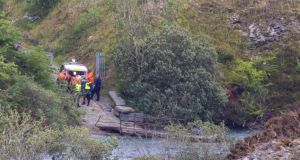 The quarry in Portroe, Co Tipperary, where two bodies were discovered on Sunday. Photograph: Press 22

Two brothers died while diving in a quarry in Co Tipperary on Sunday afternoon.

The incident occurred at the Portroe Dive Centre, at Portroe Quarry, at around 1.30pm.

The deceased were named locally on Sunday night as Fergus Brophy (43) and Philip Brophy (34) from Ballybrittas, Co Laois. Philip Brophy had been living in Portarlington, Co Laois.

The two men’s bodies were taken to University Hospital Limerick where postmortems are expected to take place later.

Killaloe Coast Guard, gardaí, and ambulance personnel were involved in the search and rescue operation.

“The males are believed to have been diving when they got into trouble at approximately 1.30pm.”

Garda sources said they were treating the incident as a “tragic accident”.

A separate source said: “They were experienced divers but what exactly happened I can’t say for sure. A lot of divers come from around the country to attend the dive centre in Portroe.

“There are a lot of members locally but a lot of people visit. It’s known as a good place to practise diving.”

According to reports one of the men got into difficulty in the water and his sibling entered the water to try to help, however both men lost their lives.

Local Independent councillor Seamus Morris described the incident as “a tragedy for the men’s families and all involved at the dive centre”.

“As a dive centre, it’s used by local divers and it has always been very professionally run. Obviously, my sympathies go to the men’s families and the dive club.

“I don’t know what happened, but diving is a sport that, unfortunately, has serious consequences if things don’t go right.”

Parish priest of Portarlington Fr Tom Dooley said: “The family are devastated and can’t believe this is happened. They are a very sound, very solid family.”

According to Portroe Dive Centre’s Facebook page it was due to reopen on Saturday, after closing last March, in line with Covid-19 public health guidelines on social distancing.

A spokesman for the dive centre was not available for comment.

According to the dive centre’s website, Portroe quarry is “one of the best inland dive locations in Ireland” and is “always diveable regardless of weather conditions”.

“Portroe slate quarry opened up five years ago as a dive centre,” it said.