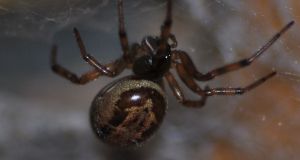 A noble false widow spider has been spotted in 22 counties on the island in Ireland.

An invasive species of spider which is spreading throughout Ireland is more aggressive and more dangerous than experts have suggested, an Oxford zoologist has suggested.

The noble false widow spider was first spotted in Ireland in 1998 and has been multiplying in number. It is found in most urban areas and has been spotted in 22 counties on the island.

It is also spreading rapidly in the UK and is regarded as an invasive species, most likely originating in the Canary Islands.

False widow spiders are so called because they resemble the deadly black widow spider, which are more commonly found in the US, Australia and parts of Asia.

In a study covering Britain and Ireland, Clive Hambler of Oxford’s zoology department, said he could no longer agree with the view of the British Arachnological Society that “being bitten by a spider is very unlikely in this country in normal circumstances”.

He suggested the abundance of the noble false widow (Steatoda nobilis) means that more people will be bitten by spiders in the future and not all will be aware of it.

Mr Hambler stressed that arachnologists were reluctant to use the word “aggressive” to describe the false widow because of its emotive connotations.

However, reports that the false widows were docile and slow moving were “erroneous and potentially misleading” and the false widow could be considered to be an aggressive spider, he said.

Mr Hambler said there was a need to improve communication between arachnologists, clinicians, and public health authorities, in order to gauge more accurately the risks from false widows.

Some people who have been bitten by false widows experience immediate pain and swelling at the bite site, but do not report it to doctors.

He suggested spider bites were “greatly under-reported” in the media or to medics compared with their actual frequency.

“After widespread media publicity in 2018 and the evidence in this paper, I predict the number of reported serious suspected bites will now increase substantially, as will the number verified with specific effects,” he writes.

Mr Hambler also suggests that untreated or unrecognised bites could lead to a “low but non-trivial risk of necrosis or sepsis”.

In one incident last year, a Co Waterford woman spent six days in hospital after being bitten by a false widow spider which ran up the inside leg of her jeans.

Since a public appeal was made three years ago, about a dozen cases in Ireland of false widow spider bites which needed medical treatment have been brought to the attention of researchers in NUI Galway.

Symptoms of a false widow spider bite include severe pain at the bite site, stiff limbs, redness and swelling. In some cases the victim can feel feverish.

A study published last month by scientists at NUI Galway and the University of Liège in Belgium also found the false widow was more venomous than was first believed.

Researchers used cutting-edge genetic and protein-based methods to identify the toxins responsible for these symptoms.

Out of a total of 140 toxins recovered, 111 were also found in their infamous cousins the “true” black widows, including latrotoxins, the compounds known to disrupt the central nervous system of vertebrates, including humans.