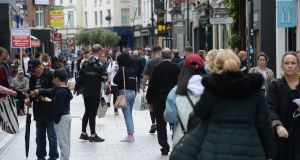 Sunday was the fifth day of no reported daily deaths in Ireland since the wave of infections peaked in mid-April. Photograph: Alan Betson / The Irish Times

The Department of Health reported no additional deaths from coronavirus and 18 confirmed new cases of Covid-19 on Sunday.

This is the fifth day of no reported daily deaths since the wave of infections peaked in mid-April and the first this month. The death toll remains at 1,741.

The 18 new cases, the highest number of daily new infections in six days, brings the total number of known cases in the State to 25,527.

The Government’s latest figures on Covid-19 show that there were three admissions of infected people to hospital and one admission to a hospital intensive care unit in the last 24 hours.

There were 22 cases of the disease in hospitals and 11 confirmed cases in ICUs.

The number of clusters – each defined as two cases or more – in private houses stands at 1,070, including 718 in the east of the country. The bulk of these outbreaks occurred in March and April.

New figures show Irish laboratories never hit the health service’s target of 15,000 coronavirus tests per day, even during the worst of the pandemic.

The early weeks of the coronavirus outbreak were dominated by failures in the testing system, which led to a large backlog and delays of up to two weeks for results.

Public health experts have warned a robust testing system to identify quickly and then isolate confirmed cases of Covid-19 is essential to preventing a second wave of the virus.

The most tests processed by labs in one day was 11,504 on April 29th, followed by 10,374 the day before, according to figures released by the HSE to Social Democrats co-leader Róisín Shortall.

A spokeswoman for the HSE said: “It was hoped that the public health measures would prevent the requirement to ever undertake [the capacity of] 100,000 tests in a week. Thankfully, this has been borne out.”

She said the HSE may see a demand for increased testing capacity again as the country opens up from lockdown.

Ms Shortall said despite ramping up testing capacity to meet demand, “very little testing has been done so far for potential asymptomatic carriers”.

“There is an opportunity now to scale this up, especially among those working in high-risk settings. That should be taken full advantage of to get firmly ahead of the spread of this virus and prevent a second wave,” she said.

Prof Killeen believes sustained and enhanced measures could eliminate the virus within months, while repeatedly imposing, lifting and re-imposing restrictions “to merely suppress the epidemic” until it burns out may be a dangerous gamble that could “persist for years, decades or even indefinitely”.

“It’s likely that Covid-19 could establish itself as a permanent disease with unpredictable waves every few years,” he said.

“On the economic front, incomplete suppression of the epidemic means extending the damage over years rather than months [and] asking business to spend more time operating under restrictions that push them into the red.”

Once the virus is eliminated, even “the slightest easing of travel or importation controls could cause a rebound”, he said.

This would mean isolating all incoming travellers, except those coming from countries that may be certified as free of local transmission by the World Health Organisation in the future.

“At a time when so many decision-makers are considering tempting justifications for relaxing unpopular lockdown restrictions, it is now vital that the governments and citizens of every country instead embrace intensified containment, elimination and exclusion efforts,” said Prof Killeen.

Meanwhile, the trade union movement has called on Tánaiste and Minister for Enterprise, Trade and Employment Leo Varadkar to amend rules to make Covid-19 cases in the workplace notifiable to the Health and Safety Authority as a serious occupational health and safety hazard.

“Healthcare workers, workers in meat factories and the aviation sector continue to perform their duties in circumstances of serious and ever-present danger of contracting this disease,” wrote Patrick King, general secretary of the Irish Congress of Trade Unions in a letter to Mr Varadkar.

“The situation in which they are, of necessity, placed is without precedent or parallel.”