Publicans not serving food say Government does not trust them 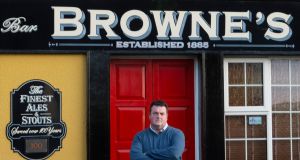 Billy Browne of Browne’s Bar in the village of Parteen is contemplating life outside the pub trade. Photograph Liam Burke/Press 22

The Browne family have run a lounge bar in the village of Parteen near the Clare-Limerick border for the best part of 170 years.

Not even raids by Black and Tans could shut the doors of the pub, but Covid-19 has proved an unbeatable force, says fifth-generation owner Billy Browne.

Even if he got the nod from Government to allow beer to flow from the taps for Christmas he argues it “wouldn’t be worth it”, a view shared by other owners of so-called wet pubs in the area who did not wish to be identified.

“We’re staying shut and were going to keep abiding by the law but I’m very disappointed by the outcome,” says Browne.

Referring to the different approach being applied to gastropubs, he says “the Government promised us they wouldn’t divide the pub and now they have done it. As far as I’m concerned they have gone back on their word. They don’t trust us, the traditional pubs, to run our premises safely.”

He says his licence to trade as a wet pub was renewed a few weeks ago. “So the courts and the gardaí are happy we can run our premises. It’s a bit like being given a [driving] licence and told you can’t drive.”

He doesn’t have a kitchen or chef to offer food and believes a takeaway service is “pure codology”.

“You’re enticing people into the town if you do takeaway. Sure people are going to drink around the area and not take it home with them, and there’s no other facilities in the area, no toilets, etc. Who’s going to supervise that?” he asks.

He does not know if there will be a customer base when pubs eventually open.

“It’s going to a big problem. You have customers that have broken habits of a lifetime, the answer is I don’t know.”

‘Not all about alcohol’

He adds that the same conversation could be had with the parish priest.

A lot of his customers are of an “older” generation, a mature group which, he argues, always act responsibly.

“It’s not all about alcohol, we are a social setting, a club house for want of a another expression. We provide a social outlet . . . no more than one would want to get out, go to a football match, the horse races, or just to walk in the countryside,” he adds.

He has invested €9,000 on upgrade works in an attempt to Covid-proof his premises and he “spoke to guy yesterday who spent €12,000”.

“I’ve heard stories about the place here getting raided by the Black and Tans, so they obviously didn’t close during the Irish Civil War or other wars. So this seems to be the one that has caught everybody”.