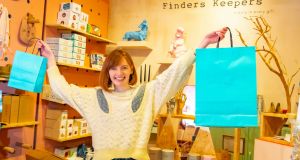 Lisa Connolly, owner of Finders Keepers in Waterford City, is not a fan of Black Friday. Photograph: Patrick Browne

While a seemingly endless stream of retailers all over the world have been marking Black Friday and Cyber Monday with the promise of deep discounts, there are others taking a stand against a sales window they believe is not in the long-term best interests of either shops or shoppers.

Each Christmas since 2017 when Lisa Connolly first opened the doors of Finders Keepers in Waterford and started selling an eclectic selection of gifts and homewares, she felt the pressure to board the Black Friday train.

“When I think of it, I think of the US and thousands of people fighting each other to get into shops. To me it represents the worst of human nature.”

She stressed that she understood why some businesses succumbed to the pressure to get involved and made it clear she was not knocking them, or those who go in search of bargains, but suggested that “people should not have to get on board with it just for the sake of it”.

For her part, she has taken an alternate route. “I don’t think people should be pressurised into it but I do want to show that we are willing to give something back and to pass on some goodwill and I think customers value that.”

What she did was to donate 10 per cent of all sales on Black Friday to Oasis, a local women’s refuge. “I think the customers value that more than they would a discount. Certainly we have had our busiest day of the year by miles. It has been absolutely crazy and I have been getting messages from people saying it has made them change how they think of the day. I think for one day we can absorb the 10 per cent. We did it last year and donated to the local hospice. We just wanted to do something sound and hopefully it might start a trend.”

Ruairí Browne runs Great Northern Larder, a small artisan food company in Dundalk and is donating 20 per cent of his sales this weekend to the local Simon Community. “Black Friday is not local and too often it takes money out of the country. I am not against consumerism but this just feels wrong to me.”

His sentiments were echoed by Glenda Vaughan who owns Gagababy, an online site selling GAA-themed baby clothes, little hurleys and more recently face masks. “I am ignoring it. I have not even referenced it anywhere on my site,” she said.

“It puts so much pressure on small businesses who feel forced to take part. A small shop might offer a discount of 10 or 20 per cent but what I think is that might equate to half the owner’s wages. It just doesn’t seem right, certainly not this year.”

She says she bowed to the pressure three years ago but had held firm since then.

“Black Friday is not an Irish concept, not even remotely. Every single thing I sell apart from one thing I can’t get here is made in Ireland.

“Everything I do supports my local economy and those businesses in turn support their local economy. That is what we should be about. That is what I want my business to be about. I want to create a really unique Irish experience as an Irish mammy working from my kitchen. I want that to come across in my presence online ad in my products. Black Friday does nothing for that.”