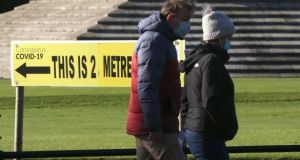 Milford in Co Donegal has the highest 14-day incidence rate of coronavirus cases in the State. Photograph: Stephen Collins/Collins

The electoral area of Milford in Co Donegal has the highest 14-day incidence rate of coronavirus cases in the State and is more than three times the national rate, the latest data shows.

The 14-day rate per 100,000 population is a useful measure of how the virus is spreading and data has been made available by authorities showing that rate in each 166 local electoral areas.

Of the six areas with the highest incidence rate of coronavirus in the State, four of them are in Donegal. Milford is followed by the electoral area of Letterkenny (305.5) while the areas of Buncrana (281.7) and Carndonagh (265.3) have the fifth and sixth highest rates in the country respectively.

When the figures were published two weeks, Buncrana had the highest rate in the country at 536.5 cases per 100,000 population.

The national rate has been decreasing gradually since the move to tighter restrictions on October 22nd and stood at 107.8 as of Monday, down from 135 two weeks ago.

In Dublin, Ballymun-Finglas had the highest incidence rate of coronavirus cases in the county at 192.7, followed by Tallaght South (163.5) and Blanchardstown-Mulhuddart at 158.6 cases per 100,000 population.

The electoral area of Rush-Lusk recorded the lowest incidence rate in Dublin of at 46.1 per 100,000 population, 2.3 times lower than the national rate. This was followed by Glencullen-Sandyford at 49.2 and Pembroke at 59.4.

Search the table with this story to see how your area is coping with Covid-19. If you are reading this on The Irish Times app and can’t see the searchable table, go here.