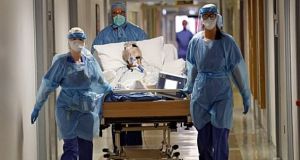 In the week up to Friday, November 20th there were 100 deaths where Covid-19 was a factor. File photograph: The Irish Times

In the week up to Friday, November 20th there were 100 deaths where Covid-19 was a factor, Nisra said in its weekly bulletin published on Friday.

Nisra said that 69 Covid-19 deaths occurred in hospitals in that week which represented the largest weekly number in this setting since the start of the pandemic in March.

The recording of 100 deaths up to last Friday was the seventh consecutive weekly increase in registered Covid-19 related deaths and is similar to numbers last reported during the first wave of the pandemic in mid-April and early May.

And as Northern Ireland began another two-weeks of intensified lockdown on Friday Nisra also reported that the total coronavirus deaths figure has now reached 1,333.

The comparative number of deaths reported daily by the North’s Department of Health up to the same date was 927.

That difference is explained by the fact that health department figures mainly relate to deaths in hospital and patients who had previously tested positive for the virus.

Nisra’s figures go deeper in that they relate to death certificates in the wider community where Covid-19 was recorded as a factor in the death.

The 456 deaths which occurred in care homes and hospices involved 106 separate establishments.

Nisra however said that “no assumptions can be made in relation to where or when the deceased contracted the disease”.

Nisra said that over the last 34 weeks there were 1,753 “excess deaths” in Northern Ireland (deaths above the average for the corresponding period in previous years) with the number of “excess deaths’” in the year to November 20th totalling 1,494.

People aged 75 and over accounted for two-thirds (65.1 per cent) of all deaths and 77.9 per cent of Covid 19 related deaths registered this calendar year up to November 20th.

It also reported 391 new virus cases, bringing the total since the outbreak of the pandemic to 51,509.

Hospital bed occupancy currently is at 95 per cent. There are 425 patients being treated for Covid in Northern Ireland hospitals with 37 in intensive care and 30 on ventilators.

The overall 7-day Covid figure for Northern Ireland is 132 cases per 100,000 of population.